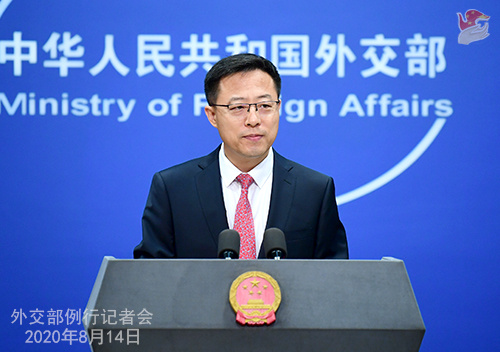 China has called on the international community to reject U.S. hegemonic interference in other countries' 5G cooperation, and uphold a fair, just, open and non-discriminatory business environment.

According to media reports, U.S. Secretary of State Mike Pompeo signed with the Slovenian foreign minister a joint declaration on 5G security during his visit to the country. Earlier in the Czech Republic, he also talked about joint efforts to build a clean network.

Foreign Ministry spokesperson Zhao Lijian said Friday at a press briefing that it is preposterous that, as the secretary of state of a country with cyber theft stains all over it, Pompeo should have the audacity to propose the building of a so-called "clean network."

"Now that the so-called 'clean network' seems to be Pompeo's pet phrase, perhaps he should explain to us, why is it that the shadowy figure of the United States can be found in cyber espionage activities from PRISM to Equation Group to ECHELON? Why is it that American intelligence authorities run a 24/7 surveillance of cellphones and computers all over the world, even eavesdropping on leaders of U.S. allies for over a decade? This is apparently the modus operandi of a hacker state," Zhao said.

The U.S. claim of "protecting privacy and the individual liberties of citizens" is nothing but a high-sounding pretext, Zhao said, adding that from meddling in other countries' 5G rollout to openly coercing allies into excluding Huawei, certain U.S. politicians have no scruples resorting to state power as long as it can stop Chinese businesses from getting an edge in 5G.

"I'm afraid what they have in mind is not a 'clean network,' but an 'American Network;' not a 'secure 5G network,' but a 'U.S. surveillance network;' not protection of 'privacy and liberties' of the individual, but consolidation of 'digital hegemony' of the United States," the spokesperson said.

"We believe the world can see certain U.S. politicians for who they really are, reject U.S. hegemonic interference in other countries' 5G cooperation, and uphold a fair, just, open and non-discriminatory business environment," he added.

Zhao said in an era of globalization, 5G development should follow the concept of international consultation, joint contribution and shared benefits, and politicizing relevant issues or creating cliques will not be conducive to 5G progress.

"Such practices run counter to the fair competition principle and go against the common interests of the international community," he said.