China calls on Japan to cherish improvement of bilateral ties 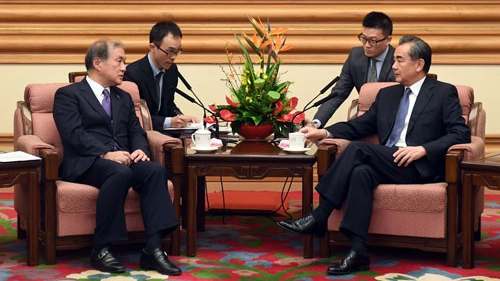 Chinese State Councilor and Foreign Minister Wang Yi on Wednesday called on Japan to cherish the improvement of bilateral ties, which have gone through twists and turns.

Wang made the remarks during a meeting with visiting Japanese Vice Foreign Minister Takeo Akiba in Beijing.

"This year marks the 40th anniversary of the signing of the Treaty of Peace and Friendship between China and Japan. The two countries need to consolidate the political foundation of the bilateral relationship laid out in the four political documents signed between the two sides," he said.

Wang added that China is willing to cooperate with Japan in areas including innovation and third-party market and work with Japan to promote the construction of East Asian economic community and regional integration.

Akiba said Japan is happy to see Japan-China ties' return to the normal track and is willing to work with China to push forward bilateral relations.