China calls on Switzerland to exclude interferences over free trade upgrade, stresses deal not a gift 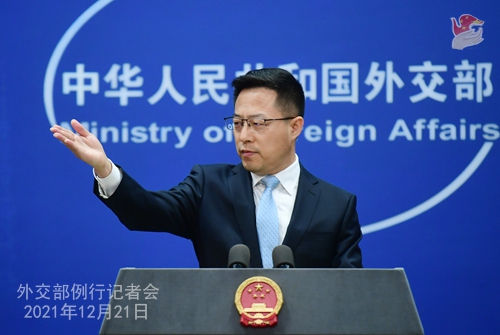 China called on Switzerland to exclude interferences and meet China halfway in negotiations over the upgrade of a free trade agreement between the two countries as some Swiss media claimed Sunday - just one day after UN human rights chief Michelle Bachelet wrapped up her six-day visit in China, including its Xinjiang region - that China stalled trade talks with Switzerland due to critical voices in the country over so-called human rights affairs related to China's Xinjiang region.

In response to a question over reported stalling of the free trade agreement, Chinese Foreign Ministry Spokesperson Zhao Lijian said at a routine press conference on Monday that the free trade agreement between China and Switzerland had largely benefitted people in the two countries since it took effect in 2014. To upgrade the agreement can help the two countries tap their potentials in trade cooperation and promote economic recovery and development under the COVID-19 pandemic.

The free trade agreement is a mutually beneficial deal and not a gift from one side to the other, Zhao stressed.

The comment came after some media in Switzerland reported on Sunday that talks between Switzerland and China had stalled since 2018 for criticism in Switzerland on the so-called human rights issues such as forced labor in China's Xinjiang region.

Zhao pointed out that the two sides had kept close communication over the upgrade of the agreement based on the principles of mutual respect and equality.

China is happy to see the agreement being upgraded, and hopes Switzerland could exclude interferences and meet China halfway, Zhao said.

Trade between China and Switzerland topped $44.1 billion in 2021, data from China's Ministry of Commerce showed. Since 2010, China has been Switzerland's biggest trading partner in Asia and its third largest globally after the EU and the US. The two countries signed a free trade agreement that entered into force on July 1, 2014, the Xinhua News Agency reported.

Since last year, anti-China forces, especially the US-backed World Uyghur Congress (WUC), rallied dozens of organizations to pressure the Office of the UN High Commissioner to have "genocide" investigated on a list provided by the "Uyghur Tribunal" - another farce staged by the WUC, which analysts slammed for having strong political objectives.

At a press conference held on Saturday in Guangzhou, South China's Guangdong Province, Bachelet stressed that her trip Xinjiang is not an investigation and said her mission had wide and open discussions with people from different sectors in the region, including prisoners and former trainees of vocational education and training centers and all these meetings were organized by her delegation.

On the same day, Chinese Vice Foreign Minister Ma Zhaoxu told media that Bachelet's visit provided an opportunity to observe and experience first-hand the real Xinjiang amid many sensational lies told by certain Western countries and anti-China elements to fulfill their motives of using the Xinjiang region to contain China.

Clouds cannot overshadow the sun, and truth will debunk all lies, Ma stressed.