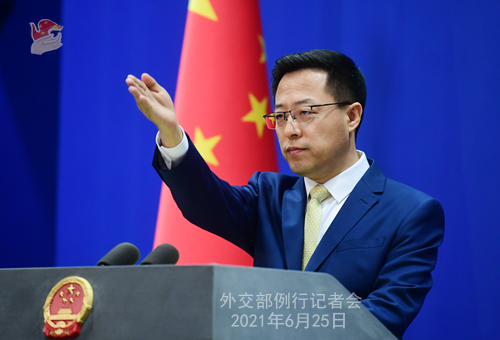 "Using lies as a tool, human rights as a guise, and hegemony as ethics, the U.S. unscrupulously suppresses the development of Xinjiang's industries," ministry spokesperson Zhao Lijian told reporters on Friday. "What the U.S. does is detrimental to Xinjiang people's rights to subsistence and development and is to create forced unemployment and forced poverty."

The remarks came after Washington announced tight trade restrictions on five Chinese companies for the so-called forced labor in Xinjiang. The companies would be subject to tight restrictions on their ability to acquire U.S. commodities, software and technology.

Zhao said the U.S. has no concern for Xinjiang people's well-being and only intends to mess up Xinjiang and contain China's development.

China will take all necessary measures to protect the legitimate rights and interests of Chinese companies and urges the U.S. to stop disseminating false information about China, Zhao added.