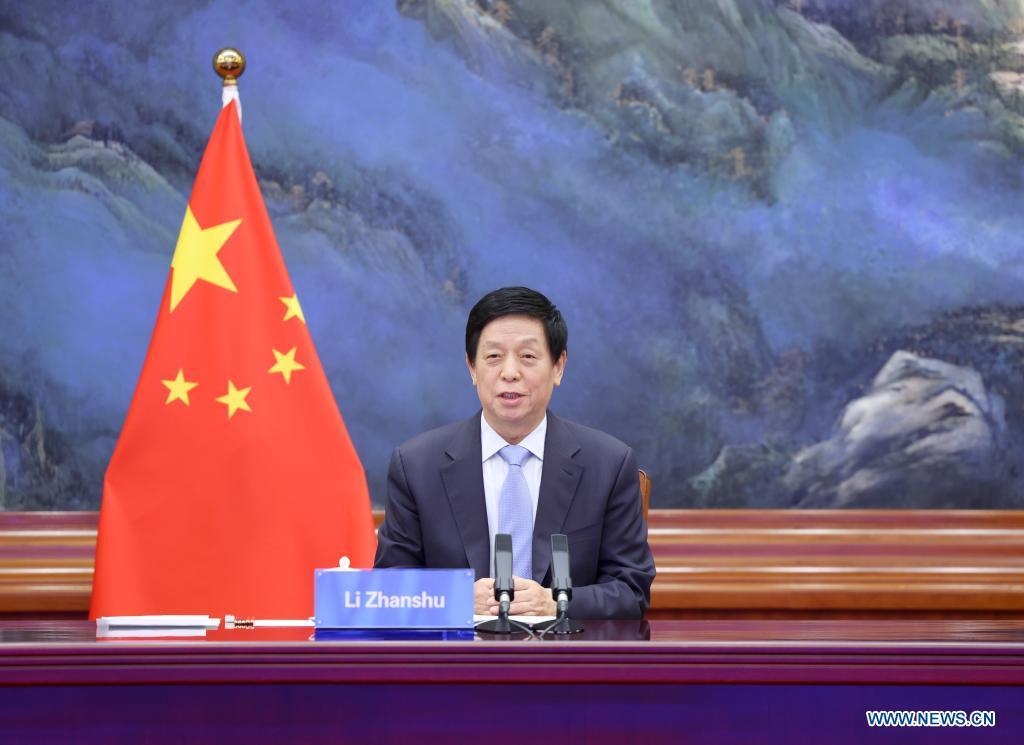 Li Zhanshu, chairman of the National People's Congress (NPC) Standing Committee, holds talks with Speaker of Kiribati's House of Assembly Tangariki Reete via video link at the Great Hall of the People in Beijing, capital of China, June 24, 2021. (Photo: Xinhua)

Lawmakers from China and four African countries exchanged views via video link on Thursday to deepen understanding of the role legislatures can play in helping lift people out of poverty and promoting social development.

Legislators from Liberia, Namibia, South Africa and Zimbabwe expressed their desire to increase cooperation with China on poverty reduction during the webinar, which was organized by the Standing Committee of the National People's Congress, China's top legislative body.

After hearing from Chinese lawmakers on what they have done for poverty alleviation through public health, education and cultural industries in recent years, Acarous Moses Gray, a member of Liberia's legislature, said that such experience is significant for his country, which is making efforts to shake off poverty.

He said he had benefited from learning about the measures taken by China's top legislature and lawmakers, and added that Liberia would like to continue its friendship and cooperation with China on poverty alleviation.

Kenneth Leonard Jacobs, a lawmaker from South Africa's National Assembly, said he learned ways to reduce poverty from China during the webinar, and that his country could also help people out of poverty by improving public health.

Figuring out the reasons for poverty is important, so that poverty-related problems will be solved, he said.

The two-day webinar, which attracted more than 40 lawmakers, began on Wednesday.

At the opening ceremony, Wang Dongming, vice-chairman of the NPC Standing Committee, called for lawmakers from China and the African nations to deepen consensus and cooperation on aspects including livelihoods, agricultural affairs and poverty alleviation.

He said poverty relief and the pursuit of better lives are the shared goals of many developing countries, adding that legislatures from China and the African nations should keep in touch, increase exchanges and foster friendly relations by innovative means amid the ongoing COVID-19 pandemic.

Speaker of the Namibian National Assembly Peter Katjavivi agreed on the need to strengthen bilateral and multilateral cooperation on poverty reduction, saying it was a common interest of China and the African countries and would also contribute to economic growth in each nation.