CHINA China can live up to Stephen Hawking's expectations for space exploration: experts

China can live up to Stephen Hawking's expectations for space exploration: experts 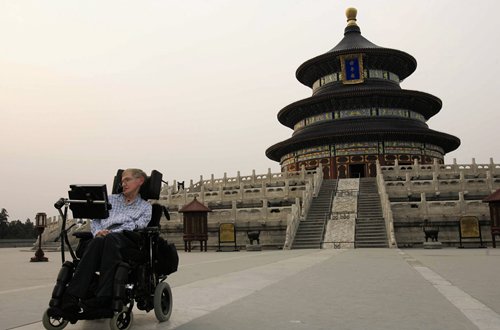 ○ Passing of renowned physicist sends waves of sadness across Chinese social media.○ Chinese netizens and scientists alike lauded Hawking for his belief in China's future.○ China hopes to live up to his prediction that it will lead the world in lunar and space exploration.

As Chinese netizens flooded Stephen Hawking's Chinese social media account to mourn his death Wednesday, many believe China is the nation that can realize the legendary scientist's high expectations for lunar and space exploration.

Chinese netizens and experts alike agree that Hawking's ambitions for humans to return to the moon after the US Apollo moon landing program might first be carried out by China.Hawking has long been a focus of attention in China and many of his past remarks were re-posted on Chinese social media. Hawking, during the Starmus Festival in Trondheim, Norway, in June of 2017, said that leading nations in the world should aim to build a lunar base in 30 years and send people to Mars by 2025.Some people argued that it would be better to spend money on solving the problems of this planet right here, but Hawking continued to advocate space exploration.Considering that the US is shrinking globally in every field, including aerospace exploration, while China has ramped up efforts on its lunar exploration project, Hawking's prediction could possibly be realized."Although China's aerospace exploration started much later than the US and other developed countries, it may still obtain a leading position in moon landing and outer-space exploration in a new era," Jiao Weixin, a space science professor at Peking University, told the Global Times.Jiao mentioned that with the launch of the Chang'e-5 Moon sample return probe last November, China has completed its original three-step program to separately orbit, land on and collect materials from the moon.A mission to land a rover on the far side of the moon was carried out in 2017. Future missions will target the north and south poles of the moon."Many of China's Lunar Exploration Project achievements are the first of their kind in the world and could provide invaluable scientific data, such as the internal structure of the moon, for us to know more about the moon's evolution," Jiao said."Aside from concentrating on developing a powerful rocket to support lunar exploration, Chinese scientists are working on other related technical problems. China's aerospace industry is and will be promising with sustainable financial and technical support," Jiao said.Social media celebrityBesides investing more on lunar exploration, China is also preparing for the exploration of asteroids and Jupiter, as part of its plans for deep-space exploration, Ye Peijian, a chief commander of the China Lunar Exploration Project, was quoted as saying by Xinhua News Agency.Meanwhile, the US is still pausing and pondering over choosing Mars or going back to the Moon; the Trump administration is reportedly preparing to end support for the International Space Station program by 2025, according to a draft budget proposal.The comparison between China and the US may be one reason why Hawking paid close attention to the development of China's aerospace industry and stayed in intimate interaction with Chinese netizens - via Sina Weibo - after debuting on the country's popular social media platform on April 12, 2016.On September 15, 2016, Hawking posted on his Sina Weibo, noting China's lunar exploration program. He wrote that "It is almost time for the Mid-Autumn Festival, one of the most important and oldest cultural festivals celebrated today. Worshiping the moon has been practiced by many cultures the world over… It's hardly coincidence that Chang'e is both the name of the goddess of the moon and the CNSA [China National Space Administration]'s lunar exploration program."Hawking also actively engaged with Chinese companies and local youth while promoting his interstellar travel plans. Last November, Hawking made an appearance in a video at We Summit, an annual science conference organized by China's tech giant Tencent in Beijing. He addressed the urgency of finding another habitable planet and pleaded with investors to support his Breakthrough Starshot program.Breakthrough Starshot was initiated to empower humans to make early forays into outer space. He co-launched it with Russian entrepreneur Yuri Milner, who invests in some of China's most prominent hi-tech companies including Alibaba, Xiaomi and JD. It was not the first time that Hawking tried to arouse attention from the Chinese side. At the launch ceremony of Breakthrough Starshot in April of 2016, Hawking on Sina Weibo shared one of his 20 tweets from the past two years. Netizens flooded to his Weibo with comments saying "stunning" and "amazing." Unlike other scientists, Hawking enjoyed a substantial following among Chinese youngsters. On April 12, 2016, he made a splash on Weibo with his first tweet greeting the Chinese, which garnered more than 441,680 comments and over 1 million thumbs up."The reason that Chinese people like him is that he is not limited to his scientific achievements, but more importantly, his firm spirit while in broken body," Li Miao, dean of the Institute of Astronomy and Space Science at Sun Yat-sen University, told the Global Times.Hawking lived with Amyotrophic Lateral Sclerosis, a neurodegenerative disease that affects nerve cells and wears away muscle function, for over five decades. 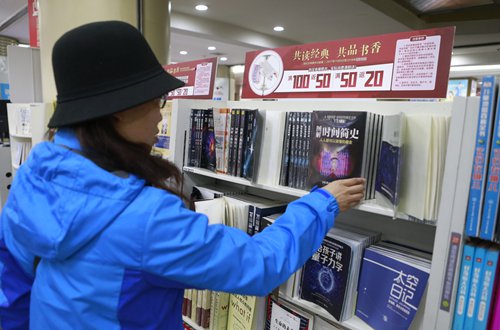 A woman examines a copy of A Brief History of Time at a bookstore in Beijing. (Photo: GT)

Lauding millennialsWith more than 4.7 million followers on Weibo, Hawking shared his thoughts on cosmology, space exploration as well as encouraging youngsters to join his scientific research.One of his most popular posts is about his interaction with Wang Junkai, lead singer of China's popular boy-band Tfboys. Wang asked Hawking how humanity should prepare for interstellar migration. In response, Hawking lauded Chinese millennials for their thoughts and curiosity regarding the future. "One of the most important jobs in Hawking's late stage was to popularize science among young people, and that went quite successful," said Li.Giving the broad influence of the deceased scientist, some netizens also fabricated unproven quotes from him. A highly circulated quote was his "prophesy" that China will become the world's strongest country in the 21st century."China is growing ever stronger as you've said. I believe that in the future China won't disappoint you and will become the greatest country," a netizen wrote.Despite his widespread recognition, some tried to bring his image to the real world. Many articles decoding why he couldn't win a Nobel Prize emerged online after his death. Liu Cixin, a renowned sci-fi novelist, told thepaper.cn that "Chinese people have a misunderstanding toward Hawking. They often elevate him to the status of Einstein." But Hawking is incomparable to Einstein, he said.In the scientific field, many hold divergent views of Hawking. Regarding the Breakthrough Starshot program, some doubted its feasibility. Ji Yang, a researcher at the Institute of Semiconductors, wrote that the program is "nonsense" and he accused Hawking of pinning hope on the Chinese government to pay for it. Hawking also faced a backlash and pointed criticism for his concerns over artificial intelligence in China. In April of 2017, the renowned physicist delivered a message at Global Mobile Internet Conference in Beijing, where China's important players on AI industry gathered, warning that "AI could spell the end of the human race."Leading Chinese companies including Baidu, Tencent and Didi are all in full swing to set up an AI lab and advance AI development in the country. The development of AI is viewed as the key to developing China's new economy. Kai-Fu Lee, a venture capitalist, told the conference following Hawking's remarks that although AI may one day destroy humans, with the current level of technological advances, such an outcome is still far off and could be kept under control with sufficient effort, reported CGTN.Hawking in ChinaStephen Hawking visited China three times in his lifetime.In 1985, Hawking gave a speech to the University of Science and Technology of China and also entertained questions from the university's students.Hawking attended the International Congress of Mathematicians held in Beijing in August 2002.During his last visit to China, in 2006, Hawking shared his research on the universe with Chinese audiences in the Great Hall of the People.He debuted on popular Chinese social media platform Sina Weibo on April 12, 2016. Chinese netizens hailed his appearance with over 1 million followers within hours.  He currently has more than 4.7 million followers on the site.Last November, Hawking made a video appearance at We Summit, an annual science conference organized by China's tech giant Tencent in Beijing.Hawking's A Brief History of Time, topped Chinese best-seller lists for many online commercial platforms, including amazon.cn. The book has been reprinted every year over the past 10 years after being translated into Chinese in 1992, according to a report from China Education and Research Network.