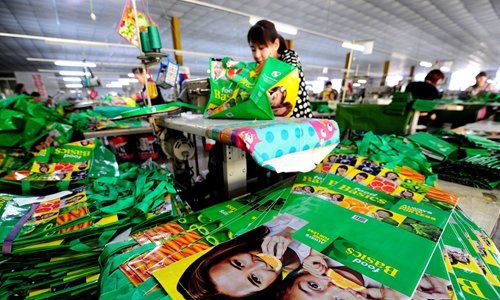 Employees work on woven bags for exportation to Canada in Shenyang, capital of Northeast China's Liaoning Province in 2014. Photo: VCG

China and Canada are likely to start talks on free trade during Canadian Prime Minister Justin Trudeau's visit to China, although there is still some distance to go before any deals can be agreed on, experts told the Global Times on Sunday. Trudeau arrived on Sunday for his second trip to China, which runs until Thursday.Overseas media reports hailed the visit as a good opportunity for the two countries to initiate free trade talks. Canada-based news site cbcnews noted on Saturday that now could be a "fruitful" time to start formal free trade negotiations between the two countries. The Wall Street Journal also reported on Friday that the two countries are "widely expected" to start free trade talks during Trudeau's visit. "I believe Trudeau's visit will generate a positive outcome. Previously, both countries conducted feasibility reports for a free trade agreement (FTA), and Canada is already a member of The Asian Infrastructure Investment Bank, so there may be some breakthrough in the FTA talks, as well as more cooperation in areas such as technology and innovation," Chen Fengying, an expert at the China Institutes of Contemporary International Relations, told the Global Times on Sunday.Cong Yi, a professor at the Tianjin University of Finance and Economics, also told the Global Times on Sunday that both countries' leaders may start looking into free trade talks during Trudeau's visit, as China "has been working on tactical cooperation and may push forward bilateral conversations proactively." China has already carried out several rounds of exploratory talks and extensive consultations on free trade deals with Canadian businesses.More urgencyAccording to Bai Ming, a research fellow at the Chinese Academy of International Trade and Economic Cooperation, pushing FTA talks will bring benefits for both sides. "China is quite reliant on several imports from Canada like wood, seafood and minerals. On the other hand, Canada also needs China's market and capital," he told the Global Times on Sunday. China's trade with Canada surged by 14.2 percent year-on-year to $42.4 billion in the first 10 months this year, customs data showed on November 8. Currently, China is Canada's second-largest trading partner. Bai also noted that Canada has cooler relations with the US, given the Trump administration's withdrawal from the Trans-Pacific Partnership earlier this year and its tough stance on the North American Free Trade Agreement, and this has prompted Canada to seek closer ties with China. Besides trade, Trudeau's trip is also expected to produce a number of business deals between Canadian and Chinese companies in the areas of clean technology and tourism, according to overseas media reports. Cong said that China and Canada have "enormous space to work on cooperation" in sectors including manufacturing, energy and agriculture. "In the past two years, the overall Sino-Canadian cooperation has been stable in both investment and business. Compared with the US, Canada is more friendly to China," Cong said. Some way to goBut Bai noted that China should not be too optimistic about the results of the FTA talks during Trudeau's visit. "Now the two countries are studying the feasibility of the FTA, but that is quite some distance from actual implementation," he said, adding that there should be rounds of talks before the cooperation will begin to take shape. Overseas media reports also noted that the Canadian government still has concerns about signing a free trade agreement with China. The Wall Street Journal report cited a spokesman for the Canadian Trade Minister as saying that they are "weighing the complexity of the challenge, the scale of the opportunity to create jobs and the realities presented by this unique market [China]." It also noted that a far-reaching trade deal with China might cause friction with other trading partners that Canadian firms rely on for sales."I think people from Canada still have worries about China not being open enough," Bai said.  Cong said that Canada has been paying close attention to China's rapid development in high-technology, and concerns about growing competition in this area might be among the challenges for development of bilateral trade and business.