CHINA China carries out air raid drills across the nation

China carries out air raid drills across the nation 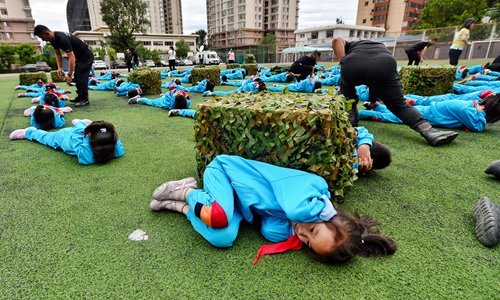 On Saturday, when China welcomed its 18th Nationwide National Defense Education Day, several provincial regions across the country sounded air raid sirens to improve people's awareness of national defense. The air defense warning drill was carried out in three parts, each spaced seven minutes apart. The first is the pre-alarm signal. The second is the air raid siren. The third is the all-clear siren. The three different signals have different meanings which need to be distinguished clearly.The pre-alarm warning is a signal given when the enemy is about to carry out an air attack on the city. On hearing this warning in time of war, people could take their essentials and evacuate in a planned way according to the location designated by the air defense department.An air raid siren is a signal that an enemy attack has begun or is about to strike a city target, warning people to take cover quickly.The all-clear is a signal issued when the danger of enemy air strikes has passed. When the alarm is lifted, citizens could return to their homes and jobs in an organized and orderly manner.At 10 am on Saturday, Beijing conducted an air defense alert test in areas outside the Fifth Ring Road to help citizens familiarize themselves with the air defense warning signals.Li Chunting, deputy director of the Beijing Municipal Civil Defense Bureau, said that the first reason for the air raid warning is to implement the civil air defense regulations and laws.The second is to further enhance the general public's awareness of national air defense and improve the ability of self-rescue and mutual rescue. The third is to test the air-raid warning coverage and the sound of the warning signals.Most cities around the country have national defense education bases. In addition to raising national defense awareness, these parks also organize military equipment displays and military equipment simulation experiences, which greatly enhances teenagers' understanding of national defense.The Shanghai Municipal Civil Defense Office arranged city-level evacuation drills Saturday in the business areas to improve the ability of white-collar workers to conduct air defense evacuations. Meanwhile, for the first time, the drill focused on community emergency evacuations for the elderly, sick and disabled."Shanghai has a large number of elderly citizens. Many senior citizens live in high-rise residential buildings. In the event of danger, how to help these vulnerable groups to evacuate in a proper manner is the focus of this exercise," said Wu Ai, deputy director of Civil Defense Office of Jing'an District in Shanghai. Cities in East China's Shandong Province, Northwest China's Gansu Province, Southwest China's Yunnan Province and Chongqing Municipality held similar events on the same day.