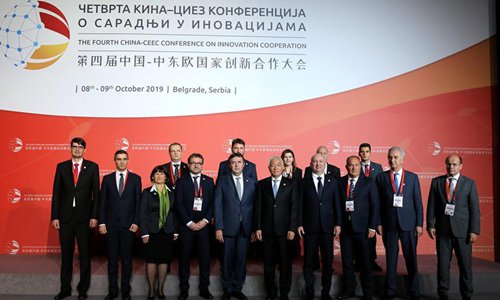 Officials and guests pose for a group photo at the fourth China-CEEC Conference on Innovation Cooperation in Belgrade, Serbia, on October 8, 2019. (Photo: Xinhua)

China and 17 Central and Eastern European Countries (CEECs) kicked off a conference on innovation cooperation in Belgrade, Serbia, on Tuesday, bringing governments, companies and academics in the innovation ecosystem together to seek synergy.

Over 270 Chinese participants from 11 provinces and four municipalities took part in the two-day conference, which on its first morning saw 12 agreements signed between Chinese and Serbian partners.

The China-CEEC format was established in 2012. Since then, a series of gatherings of political and business leaders from China and 17 CEECs have been held and have resulted in enhanced cooperation between participating countries.

Serbian Prime Minister Ana Brnabic said at the opening ceremony that Serbia seeks to support wider cooperation throughout the CEECs when it comes to the development of artificial intelligence, robotics and digitalization.

Wang Zhigang, the Chinese Minister of Science and Technology, said that CEECs have long been important partners to China in terms of scientific and technological cooperation, areas where deep trust and friendship have been established.

In addition to political leaders, academics and businesspeople on Tuesday morning crowded Hall 4 of the Belgrade Fair, where the conference took place.

From Nicolaus Copernicus to Marie Curie, Central and Eastern Europe have produced many remarkable innovators across history.

Outside the Tesla corner, companies based in China and the CEECs brought their best and brightest to seek new opportunities.

Participants of the conference, held for the first time in Serbia, are able to see the capacities of 5G technology application through its activation and can test a high-speed train movement simulator in different weather conditions, via technologies brought by Chinese companies including Huawei.

Matteo Venerucci, Chief Neuromarketing Officer of the Serbia-based Trizma Neuro, hopes to open the Chinese market by being present at the conference.

Founded by Venerucci, an Italian, together with a Greek scientist, the company engages in the field of neuromarketing.

His company combines eye-tracking and electroencephalography to serve clients such as banks.

That means "we know exactly what [customers] are looking at and their brain response, so the banks can develop the layout of the branch to be more comfortable for the customers, more understandable and, of course, increase the business," Venerucci told the Xinhua News Agency.

"China is a huge market and we would love to be in China, but we need more resources to approach the Chinese market," he said.

Teodesk, a Belgrade-based software maker, has been working mostly in the Serbian market, but is also looking to expand. Its cloud-based collaboration management software is designed to manage workforces and facilitate collaboration between teams.

"Here we communicated with a few [people] and we also got an invitation to a conference in China, so we are hoping to make some connections," Sandra Ldoski, a marketing manager, told Xinhua, noting that the current Serbian and English-language interface could easily be translated into other languages.

Cooperation between China and CEECs in innovation has blossomed in other aspects.

Earlier this year, the Serbian government and the China Road and Bridge Corporation signed an investment agreement for an industrial park to be established in Belgrade, covering a total of 3.2 square kilometers.

It will be a platform for overseas, high-tech companies to enter Serbia and the region in general.

China's success in breeding a wave of thriving, innovative companies is keenly observed here, as start-ups are increasingly looking for more than just market access.

Poduhvat is a Serbian company specializing in renewable energy technology. It designed smaller-than-conventional wind turbines, which it says could be flexibly deployed in cities, on ships or above houses, and could produce much less noises than existing ones.

Predrag Paunovic, co-founder of Poduhvat, told Xinhua that he was looking for "partners to start production in China."

When asked if he had sought partnership in Europe, he said, "We are competition for them," and since Europeans are sticking to the conventional wind turbines, "they do not wish to change anything."

"We need somebody who is smart and ambitious like the Chinese," he said.