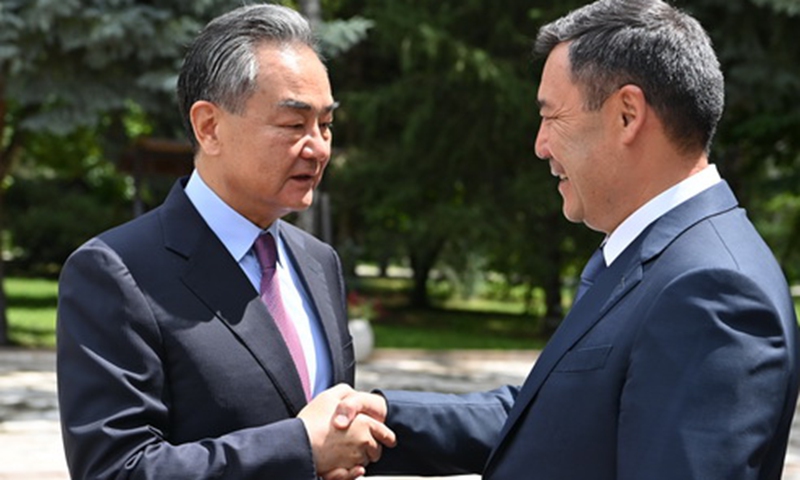 Following the consensus reached at the latest Shanghai Cooperation Organization (SCO) foreign ministers' meeting in Tashkent, China and Central Asian countries - Uzbekistan and Kyrgyzstan have agreed to enhance their strategic partnerships and build an even closer China-Central Asia community with a shared future, particularly focusing on enhancing connectivity and boosting trade and economic cooperation.

Amid the Russia-Ukraine crisis and growing uncertainties in the international landscape, Central Asian countries have been facing more security challenges and economic pressures. As landlocked countries, they usually encounter bottlenecks in development given the limited capacity in logistics and transport, and these problems have been amplified under the current crisis, Chinese experts said.

With China and some Central Asian countries reaching a new consensus in enhancing strategic partnerships and boosting economic cooperation, the development of a landmark China-Kyrgyzstan-Uzbekistan rail project reflects that the consensus between big and smaller countries within the SCO has been gradually shaped, some experts said. While the SCO used to focus more on security cooperation in the past, it will accelerate regional economic cooperation such as in infrastructure and energy in the future, they noted.

During a meeting between Kyrgyz President Sadyr Zhaparov and visiting Chinese State Councilor and Foreign Minister Wang Yi in Kyrgyzstan on Saturday, Zhaparov said Kyrgyzstan always cherishes the friendship between Kyrgyzstan and China, and sincerely appreciates China's firm support and valuable assistance to Kyrgyzstan in safeguarding sovereignty and security, accelerating economic development and improving people's livelihoods, according to the Chinese Foreign Ministry's website on Sunday.

This year marks the 30th anniversary of the establishment of diplomatic ties between China and Kyrgyzstan.

The Kyrgyz side regards the China-Kyrgyzstan-Uzbekistan railway as an important link in building the Belt and Road, the president noted, saying that his country thanks China for sending experts to do field studies and is eager to advance this state-level cooperation project in an accelerated manner.

The conditions for the construction of the China-Kyrgyzstan-Uzbekistan railway are getting ripe, Wang said. The first batch of Chinese experts arrived in Kyrgyzstan recently for site surveys, and the construction process has kicked off, he said, noting that China is ready to work with Kyrgyzstan and Uzbekistan to speed up feasibility studies.

A major suggestion from the latest SCO foreign ministers is to seek joint development. Under the Western sanctions against Russia, Central Asian countries are facing growing pressure on their economic development, Zhang Hong, an Eastern European studies expert from the Chinese Academy of Social Sciences, told the Global Times on Sunday.

"While the China-Kyrgyzstan-Uzbekistan railway symbolizes more opportunities, as its long-term planning has become ripe, it also showed that big and smaller countries within the SCO are gradually reaching a consensus, although it was not easy to do," he said.

The planning for the China-Kyrgyzstan-Uzbekistan railway dates back to 1997, and this long-awaited transnational project is expected to complete the southern passage of the New Eurasian Land Bridge, shaping a convenient transportation path from East and Southeast Asia to Central and Western Asia, Northern Africa and Europe, according to previous reports.

Advancing regional cooperation is also in line with the China's proposals made at the SCO foreign ministers' meeting on Friday, including that SCO countries should adhere to a people-centered development philosophy, carry out more sustainable cooperation projects that benefit people's livelihoods, and deepen high-quality Belt and Road cooperation.

The current geopolitical and economic situations such as the Russia-Ukraine crisis and the Afghanistan issue are adding political uncertainties to the Central Asian region, and those countries hope to increase international cooperation, particularly balancing and diversifying diplomacy to work with countries like Russia, China and India to stabilize the regional situation, Zhu Yongbiao, director of the Center for Afghanistan Studies at Lanzhou University, told the Global Times on Sunday.

"Wang's visit will help enhance regional security and development, which will also boost multilateral mechanisms such as the C+C5 format and the SCO," Zhu said, noting that enhancing connectivity and advancing more Belt and Road projects will be the major focuses in China's cooperation with those countries.

"SCO cooperation has been focused on security cooperation in the past. In the future, there will be more possibilities of expanding trade and economic ties among SCO members on the basis of safeguarding regional security," Zhang said, noting that more cooperation in infrastructure and energy are in consideration.