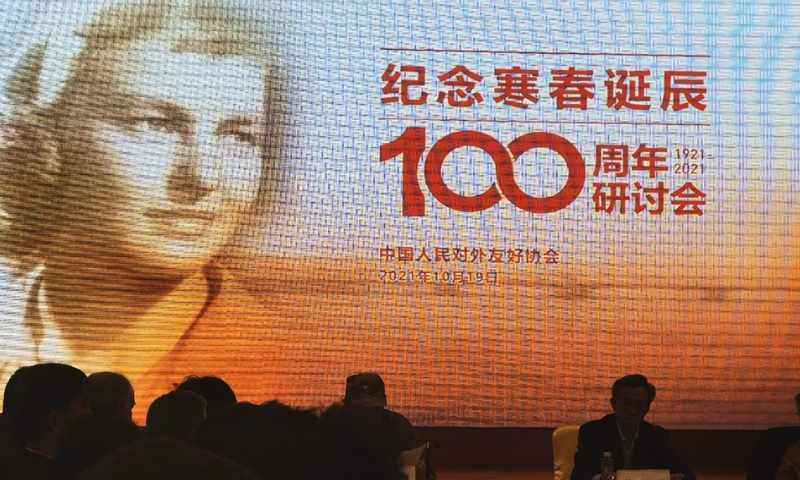 An event to commemorate the 100th birth anniversary of the US nuclear physicist Joan Hinton organized by Chinese People's Association for Friendship with Foreign Countries is held on October 19 in Beijing. (Photo: GT)

A commemoration of the 100th birth anniversary of the US-born nuclear physicist Joan Hinton was held on Tuesday in Beijing. A total of 80 representatives gathered to remember her devotion to improve China's dairy farm automation technologies for 56 years and praise her humanitarianism without borders, especially amid the current rising unilateralism across the world.

Hinton, born in 1921 in the US and known as Han Chun, was one of the first foreigners to get legal permanent residence in China. The prominent nuclear physicist was one of the few female scientists to take part in the US' Manhattan Project to develop the first atomic bomb.

Despite the success achieved with the project, Hinton was deeply shocked when she learned how the US government used the bomb in Hiroshima and Nagasaki to force a Japanese surrender. The shadow of war pushed her to give up physics and become an outspoken peace activist .

Partly out of curiosity about the post-war China in revolution, Hinton left the US to join her husband Erwin Engst who came to China in 1946 to work in agriculture.

Hinton applied her scientific skills in developing a continuous-flow automatic milk pasteurizer and tending a herd of about 200 cows in the following years.

The couple then settled down in China and spent the next decades as dairy farmers designing, building and running China's first mechanical farm, making a huge contribution to China's stockbreeding development and mechanization, as well as talent training.

In photographs displayed at the exhibition hall of the Chinese People's Association for Friendship with Foreign Countries (CPAFFC), host of the event, Hinton, who was born in a wealthy American family, looked like a Chinese peasant in the 1960s.

She was barely recognizable as a foreigner, dressed in cotton wool gender-neutral clothing and wearing a set of keys around her waist. At the New Year's party in the village she lived in, she amused locals with performances in the northern Shaanxi Province dialect.

The villagers treated the American scientist like family because of her warmth, friendliness and selflessness.

When she died in Beijing in 2010 at the age of 89, some of her ashes were scattered on the grasslands in Inner Mongolia where she worked.

Rumors and criticism of Hinton in the US have never stopped, especially during the McCarthy era, as many tagged her as a possible spy who stole US nuclear secrets to help China develop its atomic bomb, although there was never any evidence to support the accusation.

But in the minds of many youngsters, Hinton, like Norman Bethune, was a great Communist who made great contributions to the liberation of new China.

"I admire the courage and moral principles of Joan Hinton. She was truly devoted to everything she did, either in nuclear physics or milk industry," a Russian student at Peking University who attended the memorial session told the Global Times.

"Because she saw the connection between common people and government, she believed in peaceful ideology of Communist Party of China (CPC) and wanted to contribute by herself. Joan Hinton by her own example demonstrated another side of CPC and Chinese nation, she became a connection between Western and China," Zhao Yuezhi, professor at Tsinghua University, mentioned during the event.

"Now, globalized neoliberalism has spawned an era of nationalism and isolationism. More worryingly, the threat of a new cold war against China is destabilizing a world that needs international cooperation even more because of global issues, such as COVID-19 and ecological crises," Zhao remarked, adding that "because of this, we are more aware of the significance and values of the internationalism spirit represented by Hinton."

"Hinton was a participant and pioneer in the great cause of Chinese socialism, as well as a practitioner of the lofty revolutionary spirit of China," Lin Songtian, head of the CPAFFC, suggested during the session. He also highlighted that "Hinton always had a clear and definite goal of creating a better and prosperous life for all mankind."