CHINA China commits to policy of reform and opening up: premier

China commits to policy of reform and opening up: premier 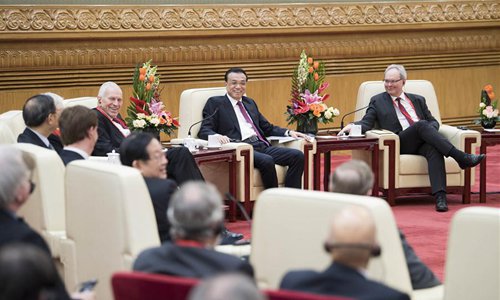 Chinese Premier Li Keqiang has a discussion with foreign experts working in China, in Beijing, capital of China, Feb. 5, 2018, prior to the Chinese Lunar New Year, which falls on Feb. 16 this year. (Xinhua/Li Tao)

China will remain committed to the policy of reform and opening up and provide more convenience for foreign experts to work in China, Premier Li Keqiang said Monday. The statement came as Li had a discussion with more than 60 foreign experts working in China prior to the Chinese Lunar New Year, which falls on Feb. 16 this year. This year marks the fortieth anniversary of China's policy of reform and opening up. "We will reaffirm our commitment to this important policy on this important anniversary," he told the foreign experts at the Great Hall of the People in downtown Beijing. He said China will continue to deepen all-round reform, implement policies of tax reduction and administrative fees exemption, and create a sound business environment. The country must carry out innovation-driven development strategy and invigorate the economy to achieve high-quality development, he said. Stressing that China needs to continue to open its doors to the outside world to introduce foreign expertise and technology, Li said the country will provide more convenience for foreign experts working in China, as this is also part of the country's opening-up efforts. He said China will take more steps to attract foreign talent by introducing easier visa arrangements including 5 to 10-year multiple entry visa arrangements, a unified application and window for handling the applications and easier permanent residence application. China announced on Jan. 4 easier visa permits for foreign professionals and high-skilled workers. Applicants will be expanded to those who qualify as high-end talent in the Categories of Foreigners Working in China, including scientists, entrepreneurs and leading figures in technology-intensive sectors, according to the new rules unveiled by the State Administration of Foreign Experts Affairs. Li said China welcomes foreign experts' valuable contribution and ideas, expecting them to take an active part in China's future development. A total of 61 experts attended the meeting, during which Li listened to the advice and suggestions from three experts on issues concerning the transformation and upgrading of China's economy and high-quality development, the "Made in China 2025" plan and nurturing of innovative talent, educational reform and environmental protection. The three experts were Edmund Strother Phelps, Nobel laureate and dean of New Huadu Business School of Minjiang University; Juergen Fleischer, Academician of German Academy of Science and Engineering (ACATECH) and professor at Tongji University; John Hopcroft, Turing Award Recipient and Foreign Academician of the Chinese Academy of Sciences. Li said China's economy expanded 6.9 percent in 2017 as it picked up pace for the first time in seven years. The economy contributed over 30 percent to the world economy growth and consumption growth contributed nearly 60 percent to the country's growth, he said. China will continue to deepen supply-side structural reform, build a modernized economic system and make full preparations for any possible risks, he said.