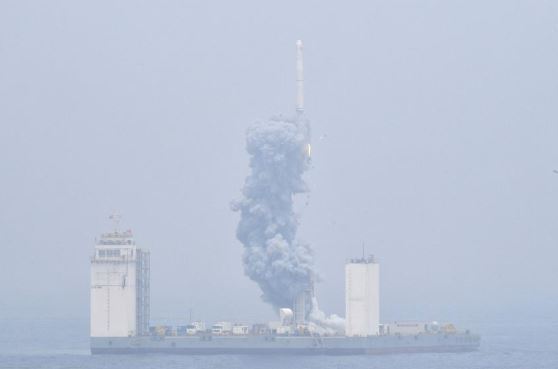 A Long March-11 solid propellant carrier rocket blasted off at 12:06 p.m. from the mobile platform. It is China's first space launch from a sea-based platform and the 306th mission of the Long March carrier rocket series.

The rocket is also named "CZ-11 WEY" under an agreement between the China Academy of Launch Vehicle Technology, China Space Foundation and a Chinese automobile producer.

Launching a carrier rocket from an ocean-based platform has many advantages over a land launch.

The closer to the equator a rocket launch can get, the greater the speed boost it will receive. It reduces the amount of energy required to get into space and means that less fuel is required.

The launch site is flexible and falling rocket remains pose less danger. Using civilian ships to launch rockets at sea would lower launch costs and give it a commercial edge.

The seaborne launch technology will meet the growing launch demand of low inclination satellites and help China provide launch services for countries participating in the Belt and Road Initiative, according to experts.

The two satellites, developed by China Academy of Space Technology, are expected to step up all-weather monitoring of ocean wind fields and improve typhoon monitoring and accuracy of the weather forecast in China.

The Long March-11, developed by China Academy of Launch Vehicle Technology, is the only rocket using solid propellants among China's new generation carrier rockets. It is mainly used to carry small satellites and can take multiple satellites into orbit at the same time.