China's top legislature is mulling a revision to the law on rural land contracts in the face of fast urbanization and increasing demand to transfer rural land-use rights.
"The revision aims to better define the use rights to rural land so that farmers can enjoy 'sufficient and guaranteed protection over their land rights,'" said Liu Zhenwei, deputy director of the Agriculture and Rural Affairs Committee of the National People's Congress (NPC), at the bi-monthly legislative session of the NPC Standing Committee Tuesday. 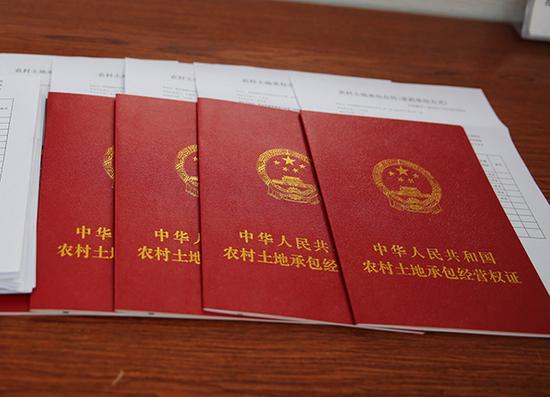 Since the country adopted the household responsibility system in the early 1980s, the property rights of rural land have been divided into two layers: the ownership right that is collectively owned by a rural community, normally a village, and the use right, which is held by an individual household that contracts a piece of land from the village.
The draft revision further separates the use right into "the contract right" and "the management right," according to Liu.
Separation of the ownership rights, contract rights and management rights of rural land will allow farmers to retain the contract right over their allotted land and only transfer the management right if they choose to lease the land to others, mortgage it to banks or invest it in a cooperative in exchange for shares.
The law, enacted in 2003, has failed to keep up with reality as industrialization and urbanization have required faster and smoother circulation of key resources, particularly land.
As the country becomes increasingly urbanized, lots of rural residents have migrated to cities, leaving their farmland unattended. There has been growing demand from rural residents to be able to officially transfer their idle farmland.
Meanwhile, rural cooperatives and large agricultural firms are trying to pool more land, and technological improvement facilitates intensive and large-scale production.
More than 30 percent of rural households have transferred their contracted land, totaling 31.93 million hectares, according to Liu.
"The bill is trying to incorporate the latest rural land policies and effective practice," he said.
STABLE LAND CONTRACTS
Stressing that the state protects the stability and consistency of rural land contracts, the draft revision says that upon expiration, the current round of contracts will be extended for a further 30 years.
The bill removes an article that forces contractors to end the contract and return the land to the village when they migrate to cities and change their household registration from rural to urban.
It should be rural residents that decide whether to continue to contract the land, rather than being decided for them, Liu said.
The bill aims to leave enough room for testing policies that encourage former rural residents to transfer the contract right, he added.
It also further clarifies that all household members, including women, have the right to contract the land.
However, the bill allows minor adjustment of land contracts. Only when two thirds of community members agree and the township and county governments approve will such adjustments be legal.
Also, contractors bear liability for the proper use of land. A contractor will be charged by the village for deserting contracted land for two consecutive years and the contract will be terminated if the land remains idle for three consecutive years.
THIRD PARTIES
A third party that obtains the management right of land is allowed to transfer the right once the contractor of the land provides written consent and reports it to the village that owns the land.
A third party is allowed to mortgage the management right of the land after obtaining written consent from the contractor.
The agreement will be terminated and the rights withdrawn if the third party uses the land for purposes other than farming without consulting the owner and contractor, or if the third party deserts the land for more than two years, causes serious damage to the land or the surrounding environment.
The bill tasks governments at the county level and above to examine the qualifications of corporations that obtain land management rights, evaluate their projects and control risks.