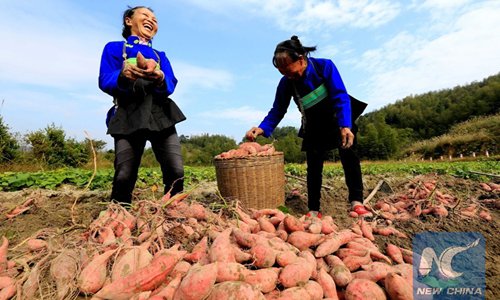 In China, the world's largest developing country, people's living standards have been continuously improved, said a white paper published on Sunday.
The white paper, titled "Seeking Happiness for People: 70 Years of Progress on Human Rights in China," was released by the State Council Information Office.
Upholding the rights to subsistence and development as the primary and basic human rights, China strives to enhance people's wellbeing through development in order to better protect their human rights, said the white paper.
It listed an array of achievements, including effectively guaranteed the right to food, elimination of absolute poverty, markedly improved living standards, safe drinking water, improved housing conditions, more convenient public transport, better health for the people, improved social assistance, as well as improved postal and telecommunication services.