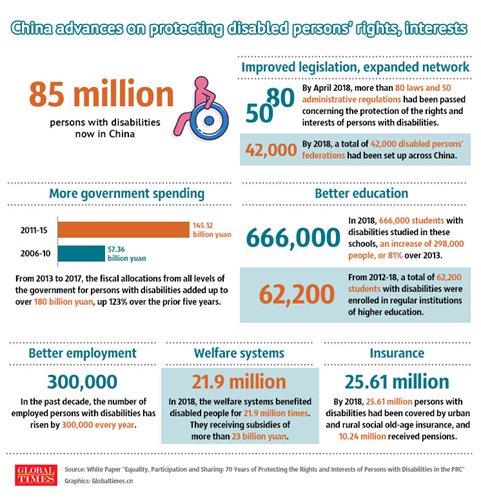 China released a white paper on the country's progress in protecting people with disabilities on Thursday, amid heated discussions following the death of a paraplegic patient due to the illegal occupation of a barrier-free path.

According to the white paper released by the State Council Information Office, the number of people living with disabilities, stands around 85 million, accounts for about 6 percent of China's population.

The white paper noted that by 2018, 25.61 million people had been covered by urban and rural old-age insurance, and 10.24 million received pensions.

It said 1,702 cities in China have started barrier-free constructions, with 75 percent of passageways, 40 percent of service desks and 30 percent of toilets in public facilities in villages and communities across the country being reconstructed to benefit disabled people.

From 2016 to 2018, the government has also helped nearly 3 million families with disabled people reconstruct their homes.

A spinal paraplegic surnamed Wang living in Beijing told the Global Times on Thursday that construction of barrier-free paths have improved in many Chinese cities like Beijing and Shanghai, but the illegal occupation of these facilities still exists.

For example, toilets for disabled people may be used by cleaning staff as a storage room, shared bikes and vehicles may occupy the barrier-free paths and most of the buses still lack platforms for people in wheelchairs, Wang said.

"I hope the government should not only provide such facilities, but also maintain them," Wang said.

Some users of China's Twitter-like Sina Weibo suggested that lessons can be learned from Chengdu, capital of Southwest China's Sichuan Province, where people can report the occupation of barrier-free paths to the government's WeChat account, before related authorities deal with the issue within three days.

The white paper followed the death of Wen Jun, a paraplegic and founder of a Beijing-based service organization for paraplegics, on July 7 when he was investigating a barrier-free path in Kunming, Southwest China's Yunnan Province.

Wen fell into an underground garage when he tried to find another way back to the hotel, as the barrier-free path was occupied by a private car.

The white paper also states that programs for persons with disabilities remain unbalanced and inadequate, and vowed to continue to improve the mechanisms.

Employment and education for the disabled has also improved greatly in the past 70 years, the white paper said.