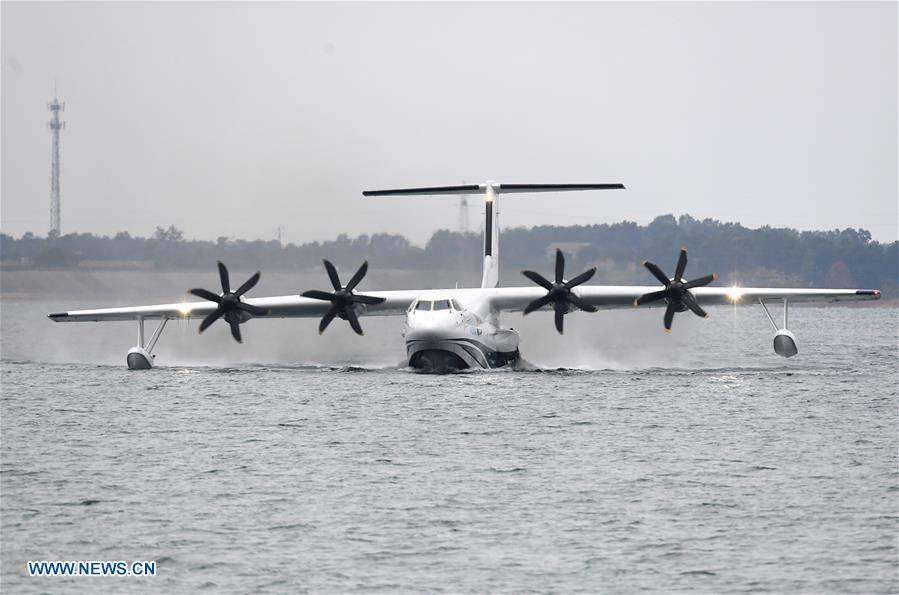 The AG600, codenamed Kunlong, lands on the water surface of a reservoir near Zhanghe Airport in Jingmen, central China's Hubei Province, on Oct. 20, 2018. (Photo: Xinhua)

China continues to lead patent applications and grants worldwide, with its number of scientific papers and citations ranking second in the world, according to a national conference on science and technology held on Wednesday in Beijing.

The ratio of the total research and development (R&D) spending to GDP is expected to be 2.15 percent and the number of workers engaged in R&D is expected to reach 4.18 million, becoming the world largest pool of R&D personnel, according to the conference.

Chinese achievement in scientific research and development last year is remarkable, with several breakthroughs made in basic research and strategic high-tech areas, said Minister of Science and Technology Wang Zhigang at the conference.

He cited the first discovery of the Majorana bound states in iron-based superconductors, the first artificial eukaryotic cell with a single chromosome, the successful landing of China’s Chang’e-4 probe on the far side of the moon, the maiden flight of the country’s first home-grown large amphibious aircraft and completion of the basic navigation system of BeiDou-3.

The progress has boosted the high-tech industry. The number of high-tech enterprises totaled 181,000, and the number of small- and medium-sized scientific and technological enterprises exceeded 130,000. The turnover of technical contracts reached 1.78 trillion yuan ($260.7 billion) nationwide.

After the Belt and Road Science Organization Alliance was established in November, about 700 young scientists from relevant countries have been funded to conduct short-term scientific research in China and prepare for the construction of the first batch of Belt and Road joint laboratories.

The country has also taken actions in facilitating foreign hi-tech talent to work in China. According to Wang, a total of 336,000 work permits and and nearly 3,000 talent visas were issued.

Still, there’s much room for China to catch up. In terms of comprehensive innovation capacity, China ranked the 17th in the world, according to the conference.