CHINA China contributes to global anti-terror cause with deradicalization efforts in Xinjiang: FM

China contributes to global anti-terror cause with deradicalization efforts in Xinjiang: FM 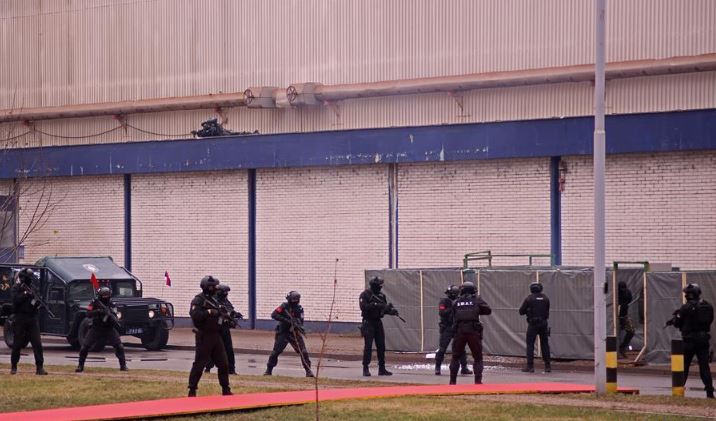 CAIRO, Jan. 8 (Xinhua) -- China has made important contributions to the global fight against terrorism with its deradicalization efforts in Xinjiang, Chinese State Councilor and Foreign Minister Wang Yi said on Wednesday.

Speaking at a joint news conference with Egyptian Foreign Minister Sameh Shoukry in Cairo, Wang stressed that the issue of Xinjiang is solely China's internal affairs.

He said that what happens in Xinjiang is an issue of fighting separatism and terrorism, rather than an issue of human rights or religion.

For quite a period, the Xinjiang Uygur Autonomous Region, as one of the five ethnic autonomous regions in China, had suffered from the woes of terrorism and extremism. Violent extremists had perpetrated a number of terror attacks, killing and wounding thousands of innocent civilians, Wang said.

To protect the safety of all ethnic groups in Xinjiang including the Muslims, the Chinese government has firmly cracked down on all forms of terror activities, on one hand, and set up vocational education and training centers, on another hand, the top Chinese diplomat explained.

These centers aimed at saving those who were infected by extremist thoughts through education and professional training to uproot extremism and terrorism at the source, he said.

In its anti-terror campaign in Xinjiang, China has drawn on the experience of many countries, including Egypt, Saudi Arabia, the United Arab Emirates, as well as many Western countries such as the United States and France, he said.

The Chinese measures "are totally legal, as they are widely recognized as preventive counter-terrorism steps," Wang said.

He added that China's counter-terrorism efforts in Xinjiang have paid off. "For three years in a row, Xinjiang has been free from violent terrorist incidents," he noted.

Wang said that all the trainees in the training centers have now graduated, and, with the help of the government, they have found stable jobs and are living a peaceful and secure life.

"It has been proved that the efforts made by the government in Xinjiang have not only provided security for local residents, but also protected the rights of religious freedom, thus making important contributions to the global anti-terror cause and providing useful experience for the global deradicalization efforts," Wang said.

The freedom of religious belief, including Islam, is fully ensured in Xinjiang, where there are over 24,000 mosques, or one for every 530 Muslims, which is a higher ratio than many Islamic countries.

Wang slammed the evil intentions of some forces in the West, which attempt to destabilize Xinjiang and undermine the ties between China and the Islamic world through smearing China, with an aim to block China's development.

"We should be clear-eyed about those Western countries accusing China of the Xinjiang issue, as they are in fact the ones which have the least respect for the Islamic civilization and inflicted heavy casualties on a great number of innocent Muslims," Wang said.

He said most Islamic countries, including Egypt, have not been deceived by the lies spread by those Western states. A total of 51 countries, including 28 Islamic nations, signed a joint letter last July sent to the United Nations to express support to China's policies in Xinjiang.

More than 70 foreign delegations from 91 countries and regions, or some 1,000 people, have visited Xinjiang and stated that China's counter-terrorism and deradicalization efforts can provide inspirations for others.

"China welcomes Egyptian friends, including religious groups, to Xinjiang to take a tour and have a look with own eyes. I bet you will see a stable, peaceful and thriving Xinjiang," the top Chinese diplomat said.