Over half of those convicted were given prison sentences of five years or more, according to a document issued by the office. 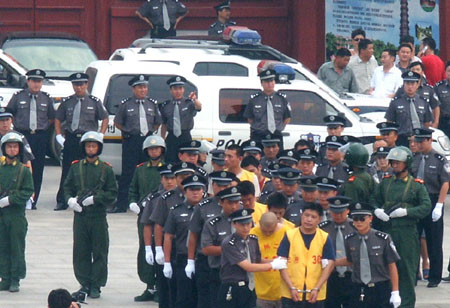 The courts have also ruled on the properties involved in the cases, and until now over 70 percent of relevant properties have been enforced according to the court rulings, the office said.

The office has supervised the investigation and handling of 111 cases involving major organized and gang-related crimes in a special crackdown. So far, trials of 63 cases have concluded and sentences handed down.

Of the remaining 48 cases, 46 are expected to close in a month, it said.

Chen Yixin, head of the national office, said China maintains a tough stance on organized and gang-related crimes. Over the last month, more than 480 criminal rings have been smashed, Chen added.

The official said authorities will make unrelenting efforts to handle the unsolved cases and pursue fugitives and properties.