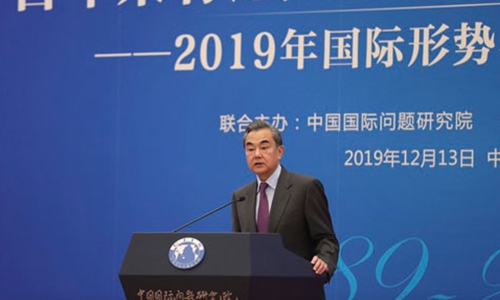 Wang Yi, State Councilor and Minister of Foreign Affairs, addresses the opening of the Symposium of the International Situation and China's Foreign Relations in 2019 in Beijing on Friday. (Photo: Global Times)

China has taken firm actions to counter US bullying and uphold the principles enshrined in the three China-US joint communiqués over the past year, China's State Councilor and Foreign Minister Wang Yi said on Friday in Beijing.

Wang said at the annual Symposium on International Affairs and China's Diplomacy that in 2019 China-US relations have encountered complexities that had never been seen in the past four decades.

Wang pointed out that in the past year, the US has arbitrarily acted to restrict exchanges and hold China down in the fields of economy, trade, science, technology and people-to-people exchanges. It deliberately smeared China on Hong Kong, Taiwan, Xinjiang, Tibet and human rights, which involve China's core interests and its territorial sovereignty and national dignity.

"Such flagrant moves are pushing the boundaries of normal international exchanges. They have seriously undercut the foundation of the hard-fought mutual trust between China and the US and dented the credibility of the US itself in the world," he said.

He noted that the US' erroneous actions originate from its wrong perception of China. Some in the US insist that China will seek hegemony when it grows stronger just like traditional powers and will ultimately challenge and unseat the United States. Some, out of ideological prejudice, find it hard to come to terms with the success of socialism with Chinese characteristics.

In response, China has firmly defended its core national interests. "We have firmly implemented the policy of 'one country, two systems,' and supported the Hong Kong SAR government in curbing violence and restoring order. We have fought resolutely against external forces interfering in Hong Kong and in China's internal affairs, and pushed back the dark hand instigating a 'color revolution' in Hong Kong," he said.

We have also given a robust response to the slanderous attacks by anti-China forces over Xinjiang, he said.

In 2019, up to 1,000 diplomats, journalists and scholars were invited to Xinjiang and see the situation there. Wang said while US perception of China has gone astray, the US is also showing a skewed view of the world.

Instead of living up to its international responsibilities and obligations, the US has opted for unilateralism and protectionism. In a little over two years, it has withdrawn from a long list of agreements and organizations, such as the Trans-Pacific Partnership Agreement, the Paris Agreement and the United Nations Educational, Scientific and Cultural Organization.

"Such blatant acts of turning back the wheels of history and walking away from international commitments have caused many difficulties and disruptions for the international community, making the US a troublemaker in today's world," Wang said.

Despite these rifts, Wang stressed that the "sound and steady development of relations between the top two economies in the world serves the interests of the two peoples and meets the common aspirations of the world."

"What the past four decades has taught us, most importantly, is that both countries stand to gain from cooperation and lose from confrontation. This valuable lesson still holds true today and will remain so in the future, notwithstanding changes in China, the US or the world," he said.

"What we advocate is fairness and justice in the world. We will never go down the beaten track of seeking hegemony with strength. What we pursue is the common progress of humankind, never the selfish interests of China itself."