CHINA China cracks down on entertainment in revolutionary tourist attractions

China cracks down on entertainment in revolutionary tourist attractions 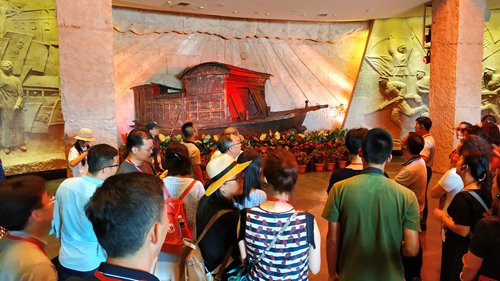 "Are you tubalu?" "Where is tubalu?" A Japanese soldier, wearing a uniform without trousers, sputters these words in English after his troops are defeated within several minutes by a Chinese teenager. Tubalu, in Chinese, is a pejorative term that Japanese soldiers used to scorn the Eighth Route Army of the Communist Party of China in the 1940s. This scene was witnessed by tourists watching a play performed in a public park in the Xiongan New Area, at the Baiyangdian tourist attraction, in North China's Hebei Province.The play in the garden is based on a story about Zhang Ga, a teenager and a war hero, who was determined to become a soldier during the War of Resistance against Japanese Aggression (1937-45) after his grandmother was killed by the Japanese. The play begins with popular music sung by a chorus of Eighth Route Army soldiers. As they sing, a bridal procession enters the stage area. All of a sudden, several Japanese soldiers rush in and try to rob the bridegroom. Motorcars and tanks encircled the bridal sedan chair, making the scene very intense.The Japanese soldiers seize the bride and drive off the bridegroom. Their leader tells the audience, "We came to Baiyangdian to conquer." In order to prove it, the Japanese soldiers begin to dance and sing, and even howl like wolves. The play was filmed on a go pro by Schlieffen, a popular Sina Weibo vlogger. He published it on his account on June 25, and it has been reposted over 5,000 times.Many netizens derided it as "magical" while others attacked it for defaming Chinese war heroes.Analysts said this play was representative of a new wave of vulgar performances in China's "red tourism." They called for the government to seriously crack down on the philistine productions and activities and stop light-hearted or irreverent retellings of revolutionary history, so that the young generation will not be "misguided by incorrect values." Dramatized historyIn early August, Chinese cultural officials pledged to further promote "red tourism," which has become a key part of China's tourism industry.While tours to former Communist revolutionary bases have been available for years, a guideline recently issued by central authorities upped the game by demanding better protection and use of cultural relics related to revolutionary history.Rao Quan, an official with the Ministry of Culture and Tourism, said at a press conference on July 30 that "rogue and low-taste elements should be banished," because "red tourism is meant to educate tourists and let them feel and understand the revolutionary spirit.""Many red tourism attractions have developed absurd performances that dramatize history and treat heroes with irreverence. To attract tourists' attention, some attractions conveyed that Chinese civilians welcomed Japanese soldiers, and other attractions depict Japanese as being powerful and prestigious," Zhang Shangzheng, dean of the Tourism Management Department at Anhui University, told the Global Times. "The battle against the Japanese was cruel and the revolution was full of hardship. But [the tourist attractions] treat them as something funny," added Zhang. According to Zhang, some tourist guides are also dedicated to spreading stories about leaders or soldiers' private lives, like their love stories, which will misguide the Chinese young generation. Lack of gravitasApart from vulgar performances, red tourism resources are also over-commercialized. Early in 2015, a report published by the People's Daily said some red tourism attractions have built up food and shopping streets and entertainment facilities, which damaged the gravitas of red tourism and harmed people's respect for war heroes. A Beijing resident surnamed Yang told the Global Times that he felt "entrapped" by the commercialism near the site of the Huangpu Military Academy in Guangzhou during a visit two years ago. Yang said the scenic spot was surrounded by street vendors that sold fake emblems, and provided photo services that allowed tourists to wear the Kuomintang military uniform. According to previous media reports, red tourism attractions were also utilized by some government departments or public institutions as a place for relaxing with public funds. "The young generation hates to be brainwashed. Therefore, officials in red tourism attractions should focus more on telling more inspiring stories so that they could know true stories, appreciate the revolutionary spirit and feel a sense of patriotism deep down," said Zhang.More than 800 million "red tourism" trips are made on average every year, said Xinhua News Agency.