China cracks down on unqualified overseas tours after boat tragedy 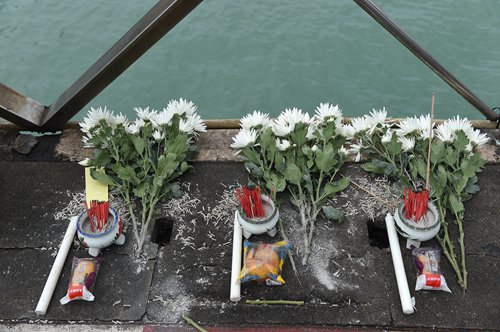 Incenses, flowers, and food are placed on Wednesday by local residents and survivors at a dock to mourn victims after two boats carrying 127 Chinese tourists capsized in Phuket, Thailand. (Photo: IC )

This disaster is likely to cast a shadow on the once most popular outbound tourism destination for Chinese tourists.

Other problems with tourism on the island have been exposed in investigations following the tragedy, including illegal zero-dollar tours and regulatory failures.

The boating tragedy and concern over traveler safety could lead to big travel agencies in China cancelling trips over the next several months, lowering government projections of up to 10 million Chinese visitors this year and 11 million next, the Bangkok Post reported, citing Thai tourism operators.

He later apologized, but some said it was chilling to see the authorities waving off their responsibility.

A tourism agency on e-commerce website Taobao told the Global Times the "zero-dollar tour" in Phuket allures tourists with an extreme low price or with no payment. But operators then lead tourists to spend extra money in malls and gift shops.

These types of tours are rare nowadays, the online seller said. The boats involved in the recent tragedy were not zero-dollar tours.

The Global Times also has been told that many tourist agencies and diving shops on the island run by Chinese were examined by Thai authorities after the boat disaster, with some closed.

Wang said many of the tour operators should have better safety training.

Shortly after the tragedy in Phuket, the Ministry of Culture and Tourism of China required Chinese online travel companies, agencies and platforms and their travel services to be examined, in case any illegal online tourism services were provided. The ministry said unqualified services must be taken down to ensure the safety of overseas trips.

Ctrip has checked the qualifications of online business operators who sell overseas services such as diving, trekking and hot air balloon riding, according to a statement sent to the Global Times.

Domestic tourism agencies must obtain relevant outbound operating qualifications for selling overseas services, otherwise they will be removed from the platform, Ctrip said.

The spokesperson of Feizhu told the Global Times that Feizhu is additionally requiring individuals to register their information before purchasing independent overseas services on their platform to keep contact with tourists in case of an emergency.

Tourists were told they could take off their life jackets after 10 minutes on board by guides on the Phoenix, one of the boats which sank in turbulent waters.

Tour guides gathered life jackets and set them aside. Life jackets were only returned to the Phoenix passengers shortly after the accident, media reported.

Not wearing life jackets on board is common on boat tours, news site thecover.cn reported.

The lack of safety awareness is one of many reasons that led to the tragedy, experts noted.

The People's Daily also reported that many long-tail boats, which carry passengers off the island for diving activities, are not maintained well. Their engines frequently malfunction and are hastily repaired.

Boatmen told the People's Daily that many boats with potential safety hazards set out every day to save on operating costs.

The death of Chinese tourists in Thailand is not uncommon. China's embassy in Thailand handled 84 cases of irregular deaths in 2017, including 61 drownings, people.cn reported Those mainly happened at sea in southern Thailand, including Phuket.

Compared with other islands in Thailand, Phuket is the largest and most developed. Many of the tourism services, hotels and restaurants are owned by Chinese, experts reached by the Global Times said.

Chinese tourists remain the biggest contributor to Thai tourism, with more than 9.8 million visitors generating about 524.4 billion baht ($16.3 billion) for the country in 2017.