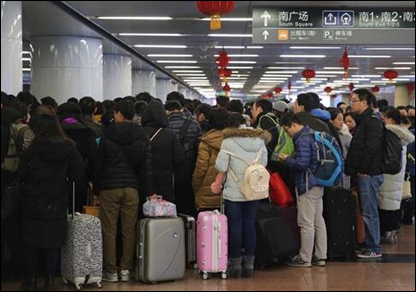 China has just doubled the world's middle-income population as its 1.4 billion people for the first time boast a per capita GDP of over $10,000 in 2019, after a decade of rapid economic growth.

The world's second-largest economy posted GDP growth of 6.1 percent in a show of resilience to cap a year marked by a US-initiated trade war, official data showed.

Despite a rapidly increasing aging population, the mainland population for the first time exceeded 1.4 billion, besides its per capita GDP surpassing the $10,000 mark to hit $10,276 in 2019, thus creating two milestones, according to the National Bureau of Statistics (NBS).

Tian Yun, vice director of the Beijing Economic Operation Association, told the Global Times Friday the world has never seen an economy with over 1.4 billion people whose  per GDP is over $10,000.

"In terms of purchasing power parity, the Chinese even led the global average by a margin," Tian said, noting that China's example offers an alternative development model for emerging countries seeking prosperity and progress.

Niu Li, a senior economist at the State Information Center, told the Global Times Friday China's success is partly due to its governance advantage, which is unique in the world.