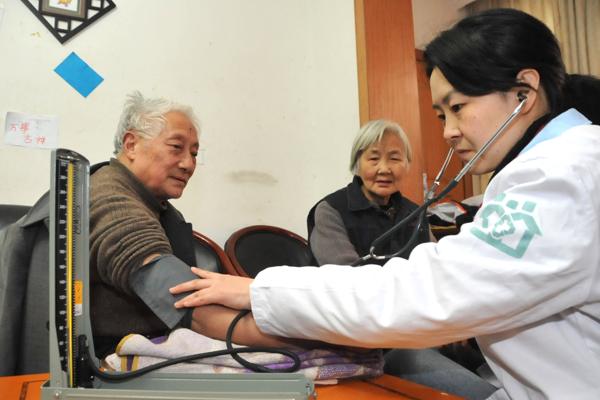 A family doctor measures the blood pressure of an 82-year-old man at his home in Chengdu, capital of Sichuan province. (Photo: Xinhua)

BEIJING - The General Office of the State Council on Tuesday released a directive unveiling a series of major tasks in China's bid to deepen the reform of its medical and healthcare system.

Stressing firm efforts to carry out the reform for the wellbeing of the people and address problems in healthcare accessibility and affordability, the document specified the priority and details of the tasks, and showed the country's dedication to the reform.

Among all fields that the tasks cover, some have stood out and already drawn considerable response from the public.

Traditional Chinese Medicine (TCM) is expected to play a bigger role in meeting Chinese people's ever-growing demand for health, as the directive called for the inheritance and development of the TCM, as well as innovation during the process.

TCM can play a leading role in the preventive treatment of disease and a key role in recovery, said Feng Li, a professor with the Cancer Hospital of the Chinese Academy of Medical Sciences.

"TCM is effective in treating pre-cancerous lesions, and can also enhance the effectiveness of chemotherapy or surgeries, as well as enhance patients' immunity during postoperative rehabilitation," Feng said.

The directive also called for more efforts in piloting the integration of TCM and western medicine in clinical practice to treat serious and major diseases.

China has been piloting the integration mode since 2018, hoping to explore new methods to treat serious and major diseases.

China will release a list of generic drugs by the end of June this year to guide enterprises to develop, register and produce urgently needed generic drugs for clinical use, public health and safety, according to the National Health Commission.

Those on the list will be the first batch of generic drugs of which production will be encouraged, the commission said, adding that a renewed list would be released by the end of each year, starting from 2020.

With healthcare reform going deeper and a population increasingly ageing, China encourages both the creation of new drugs and the research and development of generic drugs, and strives to transform from a major drug making country to a country strong in medicine manufacturing.

The list of generic drugs is among 15 regulations, of which the release by the end of this year has been listed as priorities in China's medical and healthcare system reform in 2019.

China will further build and improve the healthcare system for the country's senior citizens, according to the directive, as the system faces severe challenges due to the country's fast-growing elderly population.

For Liu Yuanli, director of the Chinese Aging Well Association, a highlight of the directive is the statement that an instructive document on the work on the system would be published before September.

It is challenging for the current elderly healthcare system to match the increasingly diverse and multi-level needs of an aging society, he said.

An improved and sound system of health services for elderly will help build a friendly environment for senior people and provide a better living quality for senior citizens and their families, Liu said.