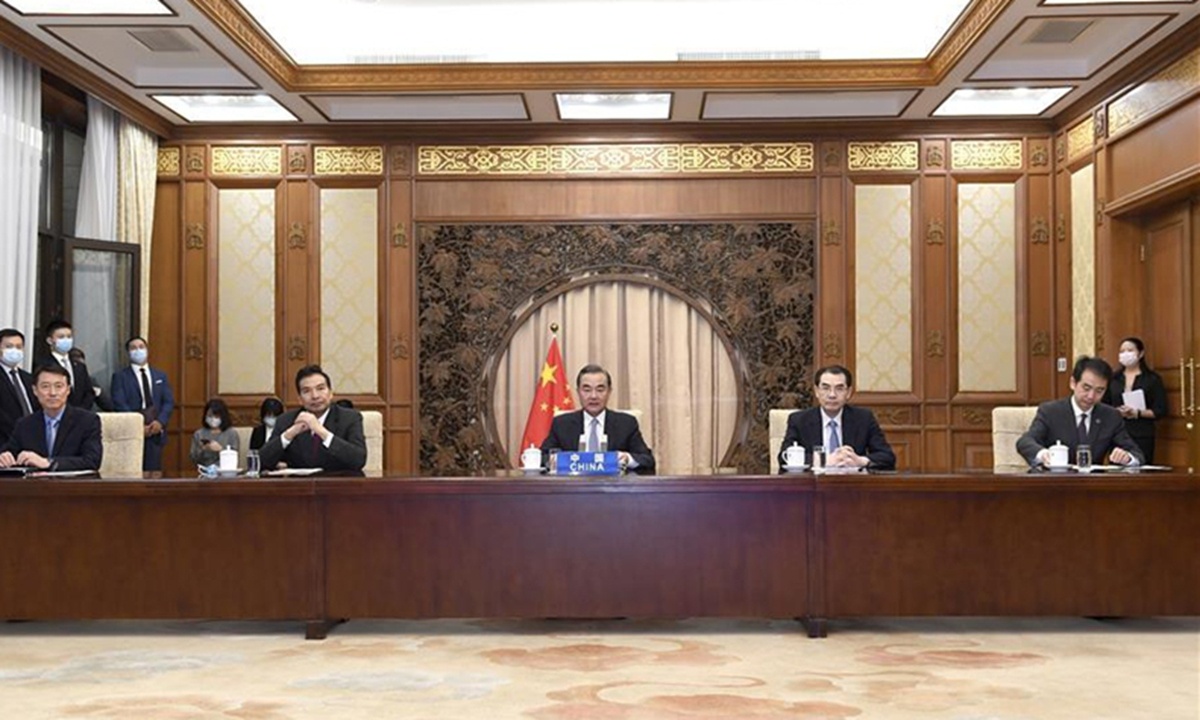 Chinese State Councilor and Foreign Minister Wang Yi met virtually with his counterparts from Afghanistan, Pakistan, Nepal, Sri Lanka and Bangladesh on Tuesday to discuss efforts on COVID-19 fight and post-pandemic economic recovery, on which vaccine cooperation and supply chain stability became major concerns. China also extended the invitation to India to attend the online meeting. Despite the absence of New Delhi in the meeting, Beijing is still committed to helping it fight the pandemic.

Given the grave epidemic situation in India, it has become an urgent task to protect people of South Asia countries from the spillover effect of the outbreak in India, experts said. The foreign ministers who attended the online meeting also reached an agreement to build China-South Asia emergency supply reserves. Experts said it is the most urgent task, as the outbreak in India also disrupted vaccine supplies in the region as India is a major vaccine manufacturing hub.

Wang reiterated during the virtual meeting that China firmly opposes willful and illegal interference with other countries' internal affairs or coercing others to pick sides, and unilateral, protectionist and bullying tactics still damage other countries' sovereignty, safety and development interests.

China and five South Asian countries agreed on building a reserve platform for emergency-response supplies while enhancing capabilities in dealing with huge public health crises and exploring COVID-19 vaccine cooperation, opposing any form of "vaccine nationalism" and vowing to close the immunity gap.

Wang said China also extended the invitation to India to the meeting, after the Chinese Foreign Ministry reiterated its willingness, for the third time in recent days, on Tuesday to help India amid surging COVID-19 infections and deaths. It is now working on allocating medical supplies from Chinese enterprises to meet the surging demand in India, including oxygen concentrators, Chinese Foreign Ministry spokesperson Wang Wenbin said on Tuesday.

The current situation in India was described by the WHO as "beyond heartbreaking." The nation has recorded more than 350,000 new cases every day, overwhelming local public health systems which are facing grave shortages in medical supplies and resources.

"The situation in India may cause a spillover effect in India's neighboring countries, and then spread to more Asian countries. For example, some rich people in India have reportedly flown to other countries to avoid the tsunami-like epidemic in the country. And out of fear, more Indians, especially those living in border areas, have fled to neighboring countries, which may increase infections," said Liu Zongyi, secretary-general of the Research Center for China-South Asia Cooperation at Shanghai Institutes for International Studies.

The five countries already expressed their concerns about surging cases of COVID-19 in India. For example, Kathmandu of Nepal has been grappling to contain the rapid rise of COVID-19 cases as thousands have caught the mutant virus strain first detected in India, Reuters reported on Monday.

A more severe problem for these South Asian countries in controlling epidemic is how to get enough vaccines as India's previous promises for more vaccine supplies have become empty given the huge domestic need for vaccines there.

India was considering giving away from 12 million to 20 million shots to its neighbors in the first wave of assistance over the next three to four weeks, Reuters reported, citing an Indian government source in January.

"Vaccination is the most significant way to control COVID-19. But it is also hard for these South Asian countries - developing countries with large populations--to get access to US-developed vaccines. This is why Wang had meetings with the five countries," Liu said.

The health ministry of Bangladesh sent a letter of interest to the Chinese embassy for COVID-19 vaccines. A request has also been sent to COVAX for at least 500,000 to 1 million vaccines to tackle the crisis, according to local media reports on Tuesday

It seeks vaccines from China after uncertainty emerged over receiving the AstraZeneca vaccine from India. On Thursday, Bangladesh's foreign ministry announced its consent to join a platform initiated by China to create an emergency stock of vaccines for South Asia, according to the report.

Compared with India, who tends to offer vaccines to neighboring countries with a geopolitical consideration, China's support to Asian countries in fighting COVID-19 is consistent and aims to strengthen regional health safety, Liu said.

The Global Times learned from sources previously that India meddled behind the halt of vaccine trials in Bangladesh of Sinovac, a main vaccine producer in China. However, Indian media said Bangladesh had to turn to India for help as Sinovac asked the Bangladeshi government to share the cost of clinical trials.

Dismissing claim that China is playing vaccine diplomacy in South Asia, Liu said that China's aid to neighboring and other countries in fighting COVID-19 has never stopped and those who smeared China's help are ill-motivated.

China has actively coordinated and provided vaccine assistance to Nepal, Chinese Ambassador to Nepal Hou Yanqi said in a post on March 31, just days after 800,000 doses of Chinese COVID-19 vaccines were loaded at Beijing Capital International Airport, heading to Nepal.

Nepal began its vaccination campaign on January 27 with AstraZeneca's Covishield vaccine manufactured in India. But with its stock depleted and no certainty when the additional doses will be available again, it stopped vaccinating people with the AstraZeneca vaccine, and began using the 800,000 doses of COVID-19 vaccine provided by China under grant assistance beginning April 7, according to the Kathmandu Post. 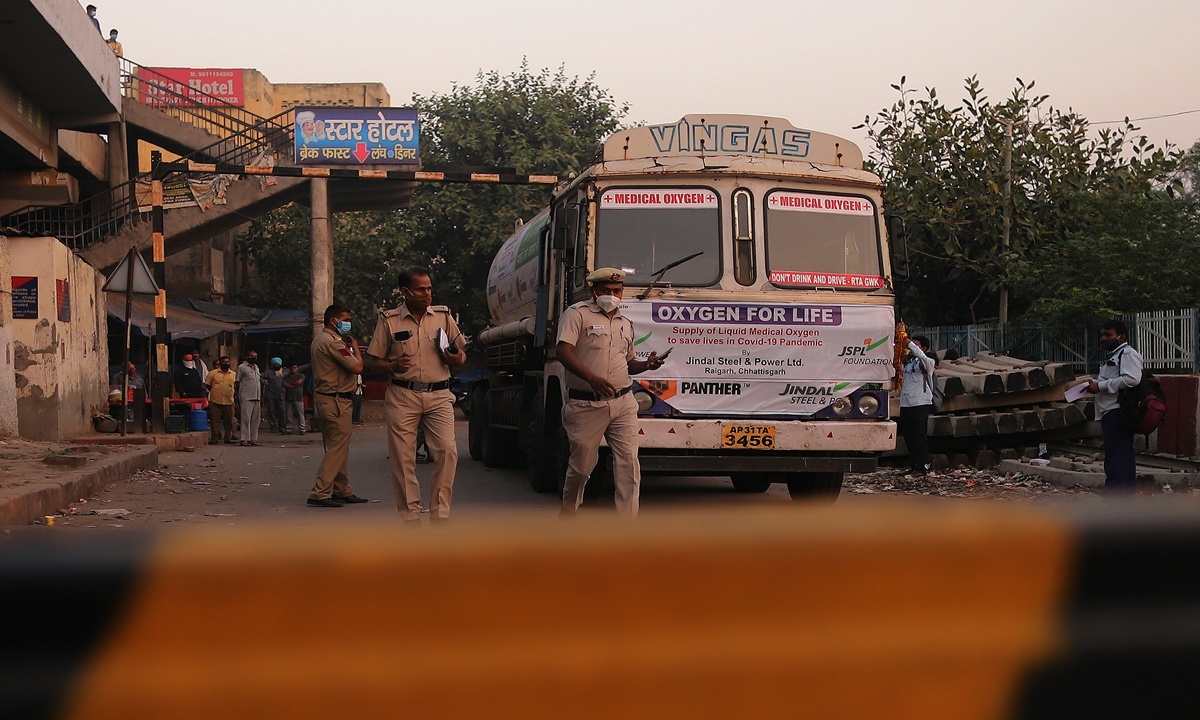 A medical oxygen tanker prepares to depart after being delivered via the ‘Oxygen Express’ train at Delhi Cantt railway station in New Delhi, India, on Tuesday.(Photo: VCG)

Making it a public good

Unlike China, which has the complete industrial chain of vaccine production, India is more like outsourcing factory for vaccines developed by Western countries, which make it vulnerable in vaccine production, Feng Duojia, president of the China Vaccine Industry Association, told the Global Times.

The number of companies that can produce COVID-19 vaccines in China will expand from five to 18, largely increasing the production capability. It also means cooperation on vaccines with China would be more stable and could localize vaccine production, Feng noted.

Pakistan, which has kept close cooperation on vaccine development, would produce the CanSino COVID-19 vaccine with the help of China, the Global Times learned from CanSino.

Facing growing fierce criticism for hoarding vaccines and raw materials, the US also reportedly plans to share 60 million doses of AstraZeneca vaccines with other countries "as soon as they become available."

The news has sparked controversy globally as these doses have not been authorized for public use in the US, and concerns remain on whether the US would simplify the safety review to facilitate the gesture to show US generosity.

"Whether these vaccines would be distributed to India or other South Asian countries remains unknown, and it is possible that the US may use them as political tools - to treat those who follow it. Few people in developing countries may benefit," Liu said.

Compared with the selfish US moves of stockpiling vaccines, China has always fulfilled its promises of making COVID-19 vaccines a public good, said Liu, noting that China's vaccines produced by Sinopharm and Sinovac have reached the final stage of the WHO approval process. And once they get emergency use licensing, more developing countries would benefit, especially developing countries in Asia.

China's Sinopharm has sent 50 million vaccine doses for COVID-19 overseas so far and analysts said that China has already provided the most vaccine doses to other countries, with many of them being distributed to developing nations.

Major Chinese vaccine producers are committed to providing technological transfer to other countries in accelerating vaccine development and ensuring the supplies. Yu Xuefeng, founder of CanSino, said at a recent Boao Forum in South China's Hainan that developing countries face bigger challenges in accessing vaccines--for example, in countries along the Belt and Road routes.