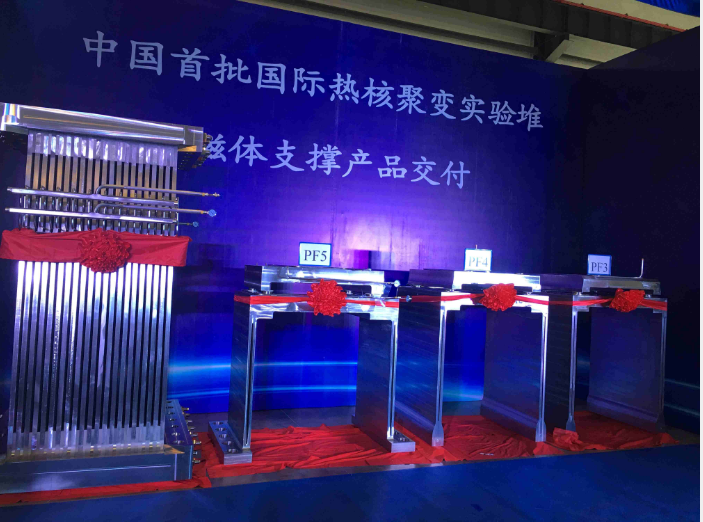 The first batch of magnet supports, consisting of different modes, designed and manufactured by China, will be delivered soon to the  ITER project's headquarters in France. (Photo: CGTN)

China has completed the first batch of magnet supports, a key component for the International Thermonuclear Experimental Reactor project, or ITER. On Saturday, these devices made their debut in the city of Zunyi in southwest China's Guizhou Province.

“Magnets are necessary for the project. We need strong support working in a severe environment with a very strong magnetic field and very low temperature. The design and manufacturing of such supports are very difficult,” Luo Delong, director of ITER China Domestic Agency, told CGTN.

These sophisticated devices have been developed by the Southwestern Institute of Physics located in Chengdu City. After eight years' efforts, they are ready for delivery to the project’s headquarters in France before long.

The magnet supports, the first basic components to be installed in the plant, will support the overall tokamak gravity load of 10,000 tons and withstand the unprecedented large electromagnetic loads experienced by the magnets.

"The completion of this batch of products is a milestone. It means that we have made technical breakthroughs, and I’m confident that we’ll be able to deliver the remaining magnet supports on time," said Liu Yong, president of the institute.

Jointly funded by the EU, US, China, Russia, Japan, South Korea and India, ITER is the largest international scientific cooperation project in the world. It is committed to exploring the commercial use of fusion power to make the world’s power supply sustainable. On completion, the fusion reactor is supposed to generate electricity in a process similar to the nuclear fusion that powers the sun.

“Fusion is a very stable process, the only thing you need is water. Meanwhile, it’s safe, the risk is very low compared with fission,” said Cornelis Beemsterboer, a senior engineer of ITER.

As a country with large energy consumption, China joined the ambitious scheme in 2006. Over the past decade, China has played an active role in terms of both funding and cultivation of research experts.

"Making such products (magnet supports) maybe unbelievable a few years ago. But you can see that during these years, China has made great improvements by working together (with us) and finally made it," said Beemsterboer.

Among the 140 procurement packages, China undertakes 18 of them, covering most of the crucial parts of the project. In January, China started to ship four vapor suppression tanks, each weighing about 100 tons, to France, which arrived at the destination in April.

According to ITER’s plan, the first operational test is scheduled for the year of 2025, while the full operation is slated for 2035.