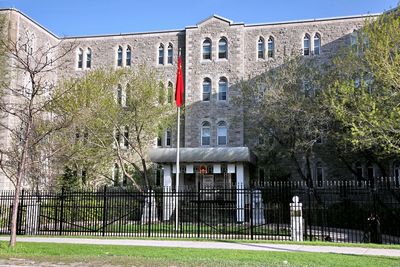 The Chinese Embassy in Ottawa. (Photo: Embassy of China in Canada official website)

Ottawa (People's Daily) -- The Chinese Embassy in Ottawa said Tuesday that China always welcomes Canadians. The remarks were in response to reports in the Canadian media that the mayor of Quebec City Régis Labeaume cancelled his planned trip to China in March because it was difficult to arrange meetings with Chinese counterparts.

A Chinese Embassy spokesperson said that this is not the case according to the information they have.

The spokesperson emphasized that China never puts obstacles in the way of people-to-people and sub-national exchanges and cooperation between China and Canada. “China believes that they are the strongest bonds in China-Canada relations,” he said.

He said they deeply regret that some people in Canada are intentionally using the issue of travel safety to deter exchanges between the two countries.

Though some unpleasant issues have indeed happened between China and Canada he continued, the Canadian people should not be blamed. “We don’t want the Canadian public to be misled by wrong information.”

He pointed out that China is one of the safest, most hospitable and friendliest countries in the world. “China always welcomes friends from all over, including Canadians, to visit our country for business or tourism purposes, and ensures their safety and legitimate rights and interests while in China.”