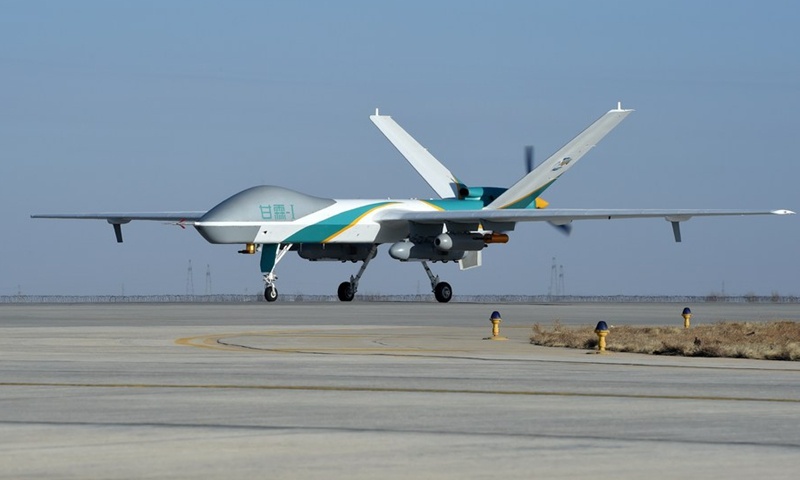 The large UAV, Ganlin-1, meaning "sweet rain" in Chinese, took off from Jinchuan airport in the city of Jinchang at 3:24 p.m. Wednesday.

This innovative move in ecological protection marks the launch of China's first large UAV-based weather-modification system, filling the country's gap in the field.

During its maiden voyage, which lasted around 40 minutes, Ganlin-1 maintained stable flight and successfully conducted weather-modification operations, such as atmospheric detection and catalyst spreading to generate precipitation, as well as the de-icing of the UAV itself.

"The Ganlin-1 large UAV contributes to the building of 'Beautiful China' with smart aviation," said Li Yidong, chief designer of the UAV.

"This large UAV, independently developed by China, represents a breakthrough in weather modification and provides an innovative option for ecological protection," Li said.

Based on China's independently developed Wing Loong-2 UAV, this new vehicle is focused on artificial precipitation, with the aim of conducting weather-modification missions in complex weather conditions.

The UAV is capable of long-range atmospheric sounding, air-data acquisition and catalyst seeding for precipitation enhancement, according to the developer.

Aside from its relatively low cost, the new UAV has several advantages over manned aircraft, including the ability to fly for longer periods in challenging weather conditions due in part to its anti-icing and de-icing features. It also has a large carrying capacity, extensive data collection capabilities and considerable growth potential.

China's top leadership has stressed the ecological protection of the Qilian Mountains, which are considered a vital shield for ecological security in the western part of China.

The Qilian Mountains, known as the "Mother Mountains" by locals, stand on the border of the provinces of Gansu and Qinghai.

Wang Chenghai, a professor from the college of atmospheric sciences at Lanzhou University, said the glaciers and snow resources of the Qilian Mountains are shrinking amid global warming.

"The use of UAVs for precipitation enhancement will help increase the ice and snow reserves, promote the ecological restoration and protection of the Qilian Mountains, and mitigate water shortage in parts of Gansu Province," Wang said.

With Ganlin-1 now in operation, Gansu has plans to double the area of weather-modification operations, extending the period of operations from a seasonal activity to the whole year. The Qilian Mountains and the province as a whole should see more rain and snow in the coming years, greatly boosting ecological protection.