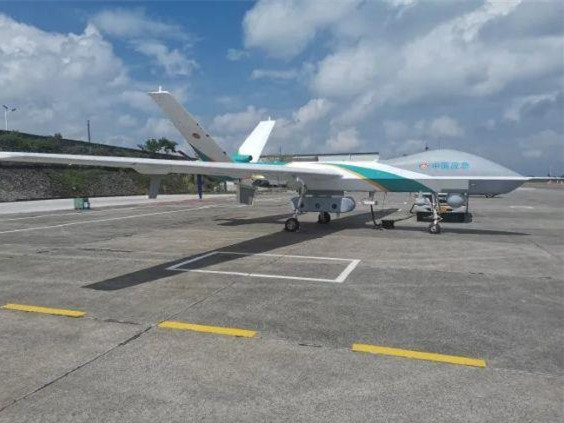 A China-developed Wing Loong-2H UAV took a 4.5-hour flight to Mihe Township in Gongyi City, one of the most seriously ravaged regions in the province, the Ministry of Emergency Management said.

At 6:21 p.m., the drone entered the areas where telecom services had been disrupted and started to provide stable and continuous mobile signal coverage for an area of about 50 square kilometers.

As of Thursday morning, telecom services in Mihe Township had resumed, the Ministry of Industry and Information Technology said.

Torrential rains have struck large areas of Henan Province since last Saturday, with 33 reported dead and eight missing as of 4 a.m. Thursday, according to local authorities.

It is a key part of the Wing Loong-2H UAV system (UAS), which is an emergency and disaster relief system designed for missions such as disaster survey, emergency communications support and supplies delivery, according to the AVIC.

The system is composed by the large UAV, a ground-control station and a support system.

The large UAV is equipped with an electro-optical/infrared pod, a synthetic aperture radar, an aerial camera, an emergency communication pod and an emergency transmit drop pod, all of which are key devices to ensure its performance during the mission.

The Wing Loong-2H is expected to play an increasingly important role in the country's disaster relief efforts, helping strengthen its rescue capability, said the AVIC.