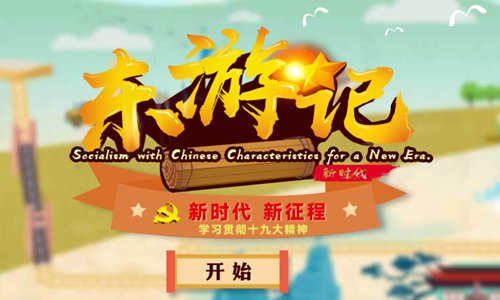 A scene from Journey to the East. Photo: Global Times

Learning about China's 19th National Congress report can be fun! Just ask Yuan Hong, a young man from Shandong Province, who recently won a ticket to travel aboard the Science, a scientific research sea vessel that will explore the Pacific Ocean.Yuan won the chance to join the exclusive excursion simply by playing a new mobile game based on the report delivered by Xi Jinping, general secretary of the Communist Party of China (CPC) Central Committee, during the Party's 19th National Congress.It is the first such game in China related to the 19th National Congress. Named Journey to the East, the game designed by a news app in Shandong Province smartly combines the national congress report with achievements the country and the eastern province have made over the past five years."The game surprised me. It is combined perfectly with a study of Xi's report, which is quite acceptable for us young people," said Yuan, who works for a State-owned enterprise.Various other forms of videos and applications emerged around the opening of the 19th National Congress in order to attract more Chinese youth. Vivid and modern, this sort of publicity has successfully lured the attention of young adults and stimulated their interest in learning about what's happening in China and within the Party.Zhang Xiaobo, chief designer behind the game, reveals that it has been played by over 6 million users since its emergence only two weeks ago. The majority of its users are Chinese born after 1985, as Zhang's team later analyzed."This sort of learning form is appealing, but first of all they need to have interest. The large number of participants shows a growing enthusiasm among young people," said Zhang.While China's younger generation born in the 1980s and 1990s are largely labeled as a generation who are mostly indifferent to politics, the fact is that more Chinese youth who are not Party members are showing greater passion in analyzing and discussing Party politics and congressional reports. These youth care very much about what China will look like in the future and how such reports will influence their life. "The 19th National Congress plans the future of China and Chinese people's life. It is closely related with everyone," noted Zhang Xixian, a professor at the Party School of the CPC Central Committee.Innovative attempts An innovative and entertaining way to learn about the 19th National Congress report, Journey to the East has been applauded by millions of users. In the game, achievements made in China, particularly in Shandong, are turned into interesting scenes, with each scene matched with a pass (a question) to guide players to learn more about Xi's report. Those who win are then given the chance to win tickets to join a real-life scientific exploration team or tickets for famed scenic spots in the province."One can learn through playing games, and play games while studying. It stimulates young people's enthusiasm in studying (the report)," said Yuan, adding that compared with routine publicity, this form of learning is more acceptable for Chinese youth.Many netizens who have played the game echoed Yuan's statement. They regard this innovative form of spreading the spirit of the 19th National Congress report as "fresh" and a "breakthrough." Zhang told the Global Times that designing a program to spread the spirit of the Party's national congress was risky, because as they all understood, "politics is not quite a young people thing." "My colleagues born in the 1990s told me that the product needs to impress them first if we want to attract young netizens. Youngsters don't like being spoon-fed," said Zhang, who works for Bolt News, an app under Shandong Radio and Television. He added that their goal was to make politics interesting enough to attract young users who are not Party members. They held more than 10 meetings before deciding on a design for the game.Journey to the East is what they finally came up with, but at first they were less optimistic about its success, estimating at most 100,000 participants. But netizens' enthusiasm rapidly spread, and within just two days of its debut, 1.3 million netizens had played the game."It was totally unexpected," noted Zhang. 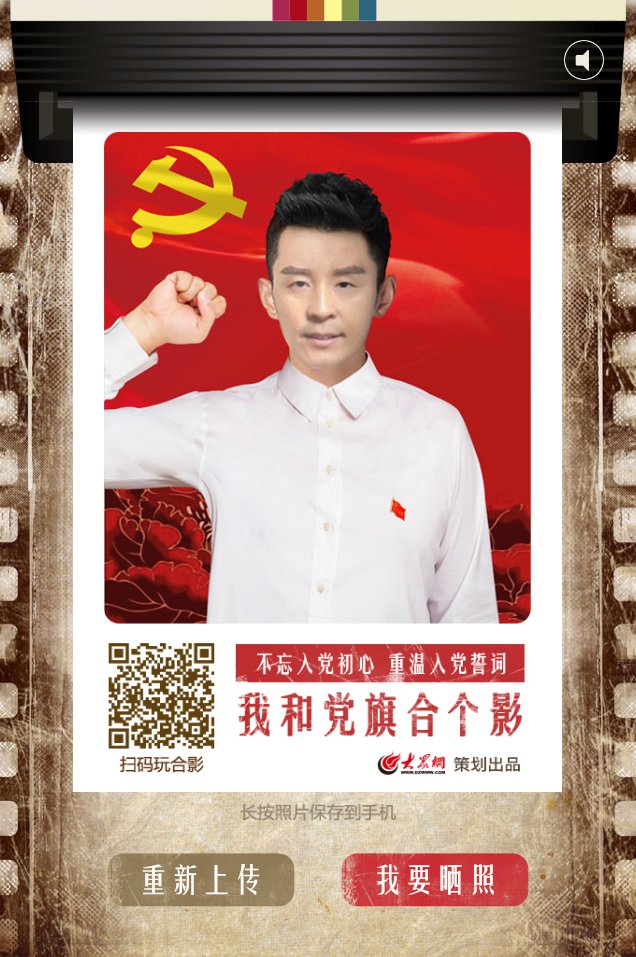 Catering to youthSimilar innovations that emerged around the 19th National Congress combining Party building knowledge with popular new media technology have also proven successful and effective in arousing enthusiasm among young Chinese netizens nationwide. In an application named "A letter for you from the Great Hall of the People (where the 19th National Congress of CPC was held)," netizens could win envelopes with a first-day issue of commemorative stamps by recording their wishes for the national congress and their love for the country. More than 300 millions netizens reportedly joined the activity. Many commented that they were enlightened by Xi's report and proud to be a Chinese, having witnessed the tremendous changes in China in recent years."Please receive my salutation, the Communist Party of China," netizen Heiying wrote following the application.In "The 19th National Congress changes you and me," a video features 18 people born in the 1990s from different fields sharing key knowledge points of the Party's 19th National Congress. It was read 15 million times on the official Sina Weibo account of China National Radio, and the video was broadcast over 9 million times.Before and after the congress, there were other WeChat applications such as "Taking a photo with the Party flag" and "Showing your 'redness' with a photo" to encourage netizens to participate in the celebration while spreading the red spirit among them. In the interactive app "Showing your 'redness' with a photo," participants could put pictures featuring their faces against different scenes that mark important landmarks in the history of the Party."It (the 19th National Congress) is the most concerned and most participated political event among people of my age in recent years," Yuan told the Global Times.As Zhang observes, the variety of publicity, the scale of spreading the Party's national congress and, most importantly, the enthusiasm of young Chinese in following the big event, are all unprecedented. 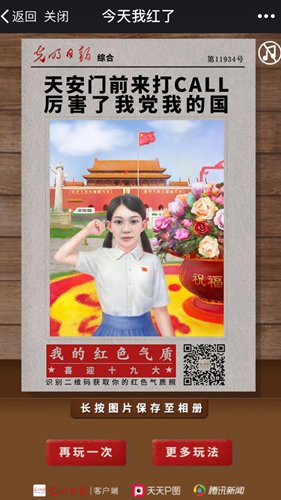 According to Zhang Xixian, publicity surrounding the Party's 19th National Congress was indeed quite penetrating, more down-to-earth and better able to enter into young people's minds than past congresses.But he also pointed out that, while this was a necessary push, in fact young Chinese are already growing more interested in the event for different reasons."In the past five years, the Party has been strengthening Party discipline and Party building and has made impressive achievements. It has enhanced its public credibility, influence and leading capacity. The Party is now closer with ordinary people than before," Zhang analyzed."On the other hand, the 19th National Congress report is closely related to the life of every Chinese. The future, as described in the report, is rather appealing to ordinary people," noted Zhang, adding that people also see hope from the current strength of the country and expect to see China play a bigger role in the world. Yang, a 31-year-old man who recently started his own company in Zhengzhou, the capital of Henan Province, said he has saved a special file on his laptop for the 19th National Congress report, which he has read many times and takes new notes each time he reads it. Specializing in foreign trade, Yang pays close attention to anything in Xi's report related to globalization, believing that it will affect upcoming policies in his field, including possible support for companies like his.He also has taken notes about China's housing prices and environmental protection efforts, expecting that they will influence his personal life. Yang said that he and his friends often get together on WeChat to discuss and debate their interpretations of certain content in Xi's report."The 19th National Congress report is new in many respects. We believe it is reliable because we have seen much progress made in fields like poverty relief, anti-corruption and environmental protection. So when they are mentioned in Xi's report, we know it is not just idle talk. We believe they can become a tangible reality," Yang said. "The report carries our future."More young Chinese adults like Yang are taking an initiative in studying the national congress report, buying books about it, attending lectures and reading analyses in an attempt to figure out their own position in society between the lines.Zhang Xiaobo agrees that what has been happening in China over the past several years has convinced the public that the Party is fulfilling its promises in making positive changes to society. This in turn has urged them to pay even closer attention to what will happen next."When one finds that their life is closely related to national policies, and that their life can get better as society progresses, they will have more motivation to pay attention and participate," said Zhang.