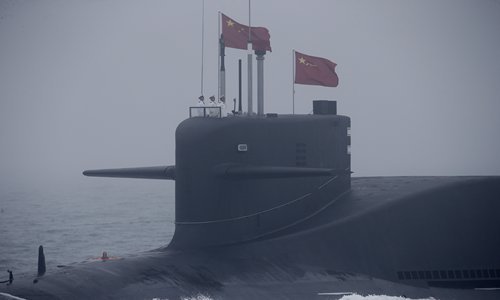 A new type of nuclear submarine of the Chinese PLA Navy is reviewed at a naval parade to mark the 70th anniversary of the Chinese People’s Liberation Army (PLA) Navy off Qingdao, East China’s Shandong Province, on April 23, 2019. (Photo: IC)

China has developed a new type of escape system for individual submarine crew members and successfully completed a combat testing for the system, as the country reaches world-level in related technologies, according to recent media reports.

During the test, six submarine crew members wearing the new escape systems quickly surfaced from a submarine that dived to the seabed of the East China Sea and safely reached the surface, China Central Television (CCTV) reported last week.

The test validated the system's parameters including basic functions, compatibility, reliability and safety, Gu Jinghua, chief designer of the system, said in the CCTV report.

Developed by the Naval Medical University of the People's Liberation Army (PLA), the system consists of a buoyant escape suit, an air inflation helmet and self-examine devices for the suit and the helmet, CCTV reported.

The new system is compatible with all types of submarines in service with the PLA Navy, the report said.