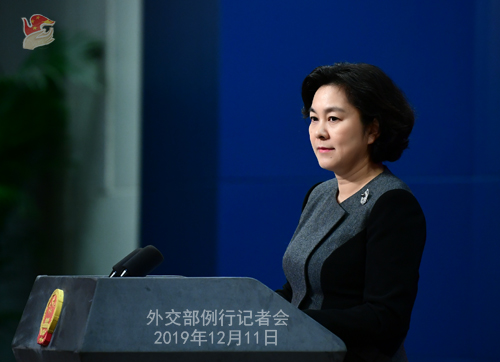 BEIJING, Dec. 11 (Xinhua) -- China on Wednesday said that the current World Trade Organization (WTO) Appellate Body impasse has imposed the most severe blow to the multilateral trading system since the establishment of the WTO in 1995.

The United States is now acting arbitrarily, obstructing relevant processes and paralyzing the Appellate Body, which reflects the fragility of the multilateral trading system, said Hua.

China is willing to work with WTO members that share the common goal of continuing to tackle the challenges facing the Appellate Body, said the spokesperson.

The WTO will no longer be able to review dispute rulings between countries because its Appellate Body will not have enough judges starting from Wednesday.

The Appellate Body, considered the supreme court of the WTO, is supposed to have seven judges. At least three members are needed to hear an appeal. Since the terms of two of the three remaining judges ended on Dec. 10 and the United States has blocked the nomination of new judges, the Appellate Body will be unable to hear new disputes.