CHINA China dismisses rumors that 1.5 million Chinese in Russia will be expelled due to pandemic

China dismisses rumors that 1.5 million Chinese in Russia will be expelled due to pandemic 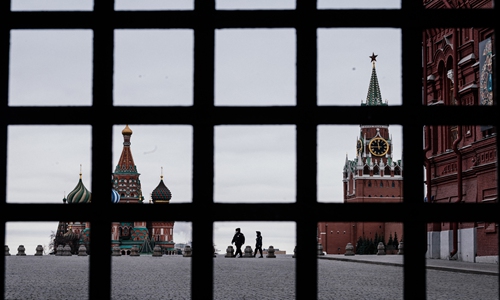 Police officers wearing face masks patrol on a deserted Red Square, with St. Basil's Cathedral (left) and the Kremlin's Spasskaya Tower (right) in the background, in Moscow on Monday, during a lockdown of the city to stop the spread of COVID-19. (Photo: AFP)

The Chinese consulate general in Vladivostok dismissed an online rumor that Russia was set to expel over 1.5 million overseas Chinese in Russia, who would return to China through three ports in Northeastern China's Heilongjiang Province.

An Chinese official with the consulate general told the Global Times on Tuesday that the rumor might have came from the fact that many Chinese may be returning through the Moscow-Vladivostok-Suifenhe route, given that the number of imported cases from Suifenhe has been soaring recently, until the port was closed down on Tuesday.

According to the consulate general, such a large number of Chinese returning from Russia is impossible as the Heihe and Suifenhe ports are both closed. A reporter learned from another source that Fuyuan port was also closing, opening annually until May 1.

The official told the Global Times that there are about 200,000 to 300,000 Chinese living in Russia, far less than the 1.5 million as mentioned by the online rumor. Besides, it is impossible for Russia to expel Chinese nationals on such a large scale; otherwise it would cause a huge diplomatic crisis between the two countries.

He noted that at present, Vladivostok requires all residents to stay at home and people will receive roughly a 1 million rouble ($13,245) fine if found breaching the measures.

Yin Bin, head of the Center of the Russia-Chinese Humanitarian Cooperation and Development in Moscow, told the Global Times on Tuesday that the pandemic has had a limited impact on people's daily lives in Russia regarding residents' employment as people are still able to go out while being fully protected, the supermarkets also provide delivery services.

According to Yin, for those workers earning a living in other countries, the pandemic has cut off their flow of income. Besides, some overseas Chinese in Russia feel China is safer regarding coronavirus containment, therefore, these two factors led to their return, rather than expulsion.

He said Russia has no reason to expel people from other countries who have proper ID and obey laws, and many Russians have showed their warmth to Chinese people as we both face a common crisis.

The Chinese consulate general in Vladivostok issued a warning on Monday through its website, strongly advising Chinese nationals to avoid making the journey along the route, which takes about 11 hours.

"Returnees have to crowd into narrow and enclosed spaces, increasing the risk of cross-infection. So please avoid the long journey," said the consulate general.

In addition, many netizens said they have received calls from immigration inspection asking if they plan to return to China, and if chartered planes are being arranged. The Chinese embassy in Moscow confirmed the information to media on Tuesday but said it had no details to be released.

According to Russian media, Oleg Kozhemyako, head of Russian's far east provincial-level region Primorsky Krai said their local government is asking the Russian federal government to arrange charter flights from Moscow to Beijing for Chinese nationals planning to return home, rather than allowing them to transit via Vladivostok.