China and Djibouti have set a model of mutually beneficial cooperation between countries that are different in country size, Chinese State Councilor and Foreign Minister Wang Yi said on Thursday when meeting with Djibouti President Ismail Omar Guelleh in Djibouti City. 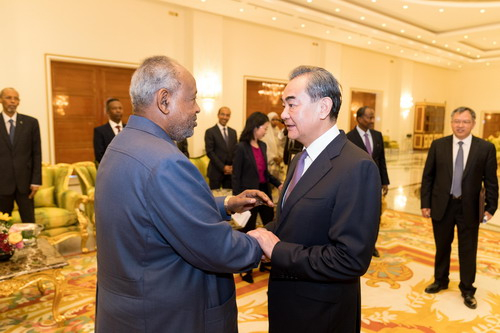 Under the strategic guidance of Chinese President Xi Jinping and President Guelleh, the strategic partnership between the two countries has been maintaining rapid development, Wang said.

He added, President Guelleh's three visits to China in the past three years have also made historic contributions to the development of bilateral relations.

The Chinese foreign minister said that China appreciates Djibouti's active participation in the Belt and Road Initiative and regards Djibouti as a good friend, good partner and good brother.

China will strengthen cooperation in the fields of blue economy, communications and digital economy and is willing to continue to provide support to Djibouti's economic and social development within own capabilities, Wang said.

Guelleh for his side said Djibouti-China relations have developed in depth and achieved fruitful results in various fields.

Regarding China as a sincere friend and indispensable partner, the Djibouti president said his country spoke highly of bilateral strategic partnership and sincerely thanked the Chinese government and people for their help to Djibouti's economic and social development.

Djibouti is willing to take an active part in the Belt and Road Initiative and jointly implement the eight major initiatives of China-Africa cooperation.

Wang hailed the sound momentum of China-Djibouti relations, calling Djibouti one of the most stable and fast-developing countries in Africa.

Appreciating Djibouti's firm support for China on its core interests and major concerns, Wang said that China is willing to view its ties with Djibouti from a strategic and long-term perspective.

The two sides agreed to enhance coordination in international affairs so as to safeguard the common interests of developing countries.