CHINA China does not "control" or "dominate" AIIB: bank president

China does not "control" or "dominate" AIIB: bank president 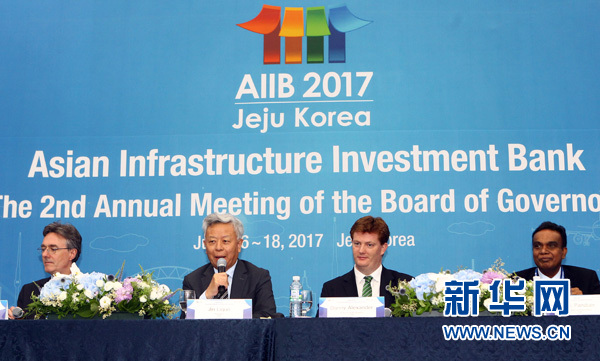 China does not control or dominate the decision-making of the Asian Infrastructure Investment Bank (AIIB), the bank's president Jin Liqun reiterated here on Monday.

As a Beijing-headquartered multilateral development bank with a mission to improve social and economic outcomes in Asia and beyond, AIIB now counts 84 members -- rising from 57 at its commencement two years ago.

AIIB has been applying high standards of governance based on international best practices to build the institution, Jin said in a speech to an event jointly hosted by think tanks the Bruegel and the Egmont Institute, noting that only 18 months into operation the bank received top ratings from all three international credit rating agencies.

"The answer is a straightforward no." Jin said, recalling the conversation at the time. "We don't feel it at all in the management team."

"Belgium would be a full member very soon. I'm looking forward to Belgium's full membership in a couple of weeks or months," Jin said to the European audience. "I want Europeans to join this bank."

"In our executive committee meeting, we discuss thoroughly every issue before we reach consensus on making any decision. No decision has ever been made without thorough debate in the executive committee...It never ever has happened," he said.

While Jin did not in his speech address the AIIB's specific projects and borrowers, an analysis of the bank data shows that India has so far become AIIB's main borrower.

The bank's website lists 24 approved projects in 12 countries, with loans exceeding 4.2 billion U.S. dollars. Among them, there are five Indian projects totaling 1.074 billion, or more than a quarter of the lending.

That is in stark contrast with earlier fears -- largely from the West -- that China would channel money through AIIB to its "friends" over its "rivals", experts noted.

Available evidence shows that AIIB focuses on capacity of its projects to yield future returns, reflecting a sensible market-oriented objective approach as a development finance institution, Amitendu Palit, Senior Research Fellow at the Institute of South Asian Studies at the National University of Singapore, wrote in an email to Xinhua.

There is little possibility of China "favouring" any of its "friends" through the AIIB given its multilateral character and the fact that the quality of projects is the main criteria for funding, Palit added.

"I had got very clear message from the Chinese authority: this (AIIB) is going to be an international bank; (it) is not a Chinese bank and I would do it independently," Jin said at the end of his speech.