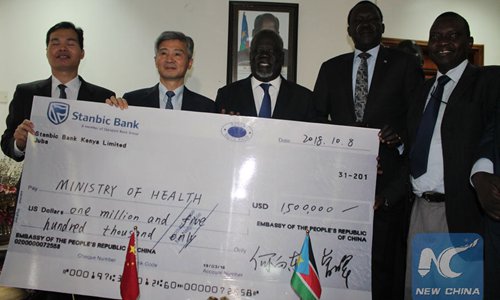 The Chinese government has donated $1.5 million to South Sudan to help prevent the spread of the deadly Ebola Virus Disease (EVD) that has killed more than 100 people in neighboring Democratic Republic of the Congo (DRC).

Riek Gai Kok, South Sudan's Minister of Health, said the donation which was made on Thursday came at the right time when South Sudan urgently needed assistance to strengthen Ebola surveillance in areas bordering DRC.

Kok said the Chinese donation would be used to purchase ambulances and other emergency response tools to help strengthen the country's vigilance against the deadly virus.

"We appreciate this timely donation from the people of China through the embassy here and I think it is going to strengthen our capacity," Kok said.

He Xiandong, Chinese ambassador to South Sudan, said the funds will help the Ministry of Health to respond swiftly and prevent Ebola from spreading into South Sudan, adding that the Chinese government will continue to support South Sudan's health sector.

According to the World Health Organization (WHO), South Sudan is one of the four high-risk countries (Burundi, Rwanda, South Sudan and Uganda) of Ebola outbreak following the outbreak in DRC, which has killed at least 120 people since August.