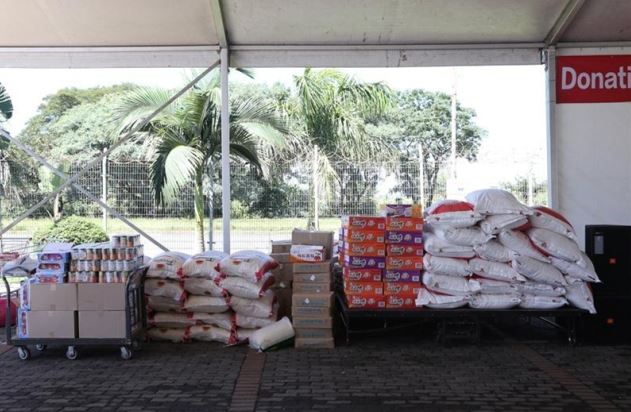 HARARE, May 24 (Xinhua) -- China on Friday donated more than 10,000 tonnes of rice to assist people who were affected by Cyclone Idai as well as vulnerable households facing hunger due to drought.

China has previously donated $800,000 cash to assist victims of the cyclone.

Visiting Chinese Vice Minister of Commerce Qian Keming handed over the consignment of 10,165 tonnes of rice to the Zimbabwean government that was represented by Public Service, Labor and Social Welfare Minister Sekesai Nzenza.

Nzenza thanked China for the donation, which came in response to the country's aid appeal following the cyclone which hit the country in March, killing hundreds of people and destroying infrastructure.

Nzenza said the Zimbabwean government was still appealing for more aid to deal with the devastating effects of the cyclone.

"This rice donation will go a long way in complementing our efforts to alleviate hunger. However, we are requesting for additional support to feed vulnerable households until the next harvest," she said.

He noted that agricultural cooperation between the two countries continued to strengthen as evidenced by donations of farm machinery, agriculture inputs, secondment of senior Chinese agriculture experts to Zimbabwe and the setting up of a demonstration center to transfer technology and know-how to young Zimbabwean farmers, among others.

"This donation is another testimony of our continuous devotion to the development of Zimbabwe's agriculture and attainment of food security.

"We believe that giving food to Zimbabwe is not enough. Helping the country to produce more food and more jobs is key to Zimbabwe's agriculture development," Qian said.

He said China will continue to work closely with Zimbabwe to unlock its agriculture potential to ensure food security and boost economic growth.

China will also continue to encourage its investors to invest in Zimbabwe's agriculture and assist the country to increase its exports to China, he said.