HARARE, June 11 (Xinhua) -- The Chinese government on Thursday donated a second batch of anti-COVID-19 medical supplies to Zimbabwe amid a spike in the number of cases in the southern African country in recent weeks.

China donated its first batch of medical supplies and equipment to Zimbabwe in April, a few weeks after the country recorded its first positive case of COVID-19 on March 20.

The second batch of assistance includes 165,000 surgical masks and more than 25,000 pieces of personal protective equipment(PPE).

Chinese ambassador to Zimbabwe Guo Shaochun handed over the donation to Zimbabwean President Emmerson Mnangagwa at a ceremony at State House that was attended by cabinet ministers, Harare mayor and other senior government officials.

"This donation is a testament to our time-tested friendship. With the Chinese government taking the lead, the Chinese military, businesses and individuals are all stepping up, reaching out a helping hand to local governments, hospitals, schools and the homeless," the ambassador said.

He said according to preliminary figures, China has now donated to Zimbabwe over 719,000 face masks, more than 21,000 testing kits and more than 100,000 pieces of protective gear to help the nation combat the pandemic.

Last month, China sent a 12-member team of medical experts to Zimbabwe on a two-week exchange program during which they shared their experience on tackling COVID-19 with local medical staff.

At the end of the mission, the team made several recommendations on tackling the pandemic to the Zimbabwe government.

Guo once again reiterated China's call for the immediate lifting of Western sanctions on Zimbabwe, saying the restrictive measures were further hurting the country's efforts to combat the deadly virus.

The sanctions were also hindering humanitarian assistance to Zimbabwe, currently facing a deteriorating economic situation marked by hyperinflation and shortage of essentials such as fuel and foreign currency, the ambassador said.

"We call for certain country to respect the legitimate rights, interests and life of the affected people and immediately lift all unilateral sanctions," Guo said.

Zimbabwe's COVID-19 cases have surged in recent weeks from 149 at the end of May to 320 as of June 11, spurred by citizens who are returning from neighboring countries.

In receiving the donation, Mnangagwa expressed Zimbabwe's profound gratitude to China for the continued support, saying the assistance was greatly assisting the country to combat the spread of the virus.

He stated that the battle against the pandemic had become a huge challenge in the wake of the worrisome increase in the number of positive cases mainly caused by returning residents.

"On behalf of the government and people of Zimbabwe and indeed on my own behalf, I express my gratitude to the People's Republic of China for the assistance that it continues to give our country.

"This support and collaboration continues to have a tremendous impact on Zimbabwe's efforts to fight the pandemic and ensure that all our frontline workers have adequate protection in the course of their duties," Mnangagwa said.

He said his government will continue to exert all efforts to curb the spread of the deadly virus while also focusing on economic and social recovery interventions. 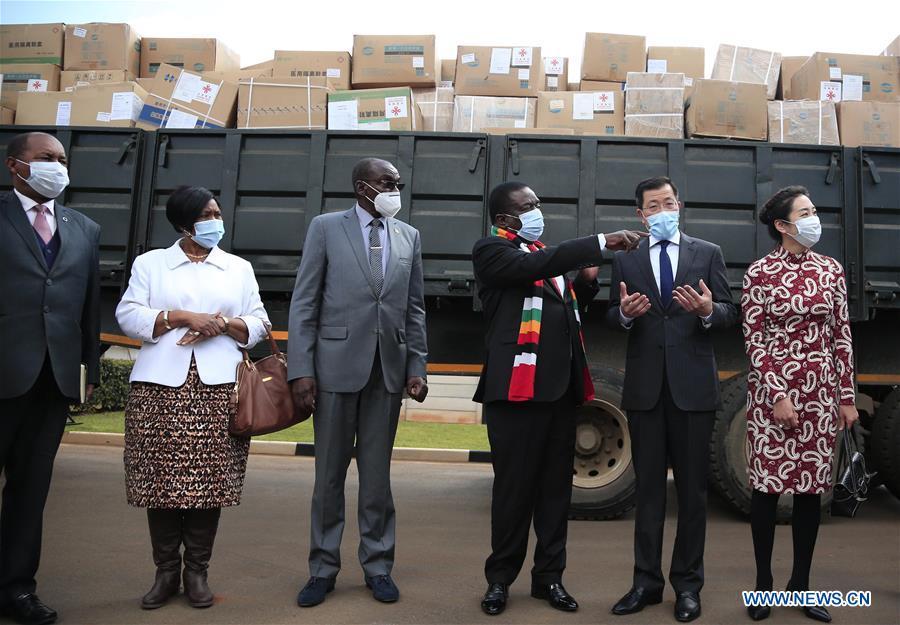