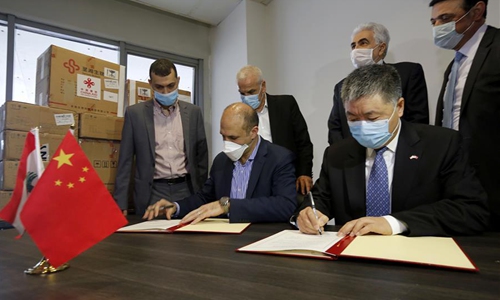 China on Thursday donated 3,000 PCR testing kits and 200 manual thermometers to Lebanon to help the country fight against COVID-19.

"Today, I have the honor to deliver on behalf of the Chinese government a batch of aid supplies to the Lebanese government for its fight against COVID-19," Chinese Ambassador to Lebanon Wang Kejian said at the airport after the arrival of the donation.

Wang expressed China's gratitude for the solidarity shown by Lebanese leaders when China was going through a tough battle against the pandemic.

"The Chinese and Lebanese sides have been cooperating closely by exchanging information and expertise about prevention and treatment," he said.

The donation from China will enable Lebanon to increase the number of tests for COVID-19 so as to assess the extent of the spread in the country, Hassan noted.

"We want to thank China for its valuable donation and we hope to be able to cooperate in the future in other sectors," Najjar said.

Last month, the Chinese government offered Lebanon two human temperature measuring instruments, which were placed at Beirut's airport, allowing the staff to measure passengers' temperature without coming into contact with them.