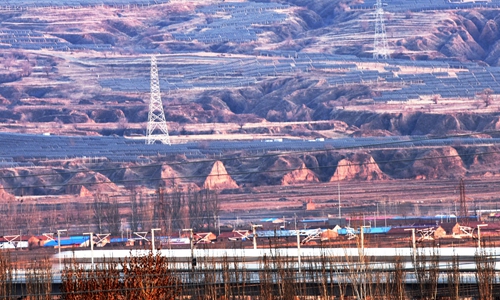 China's new energy law emphasizes the development of new energy, marketization, further opening the energy sector, and international cooperation on environmental protection. It matches the development paces of both the nation and the world, and shows China's determination to participate in global climate control, an analyst said on Friday.

"China has been opening up this sector to private enterprises and foreign companies qualified to participate in China's energy sector development," Lin Boqiang, director of the China Center for Energy Economics Research at Xiamen University, told the Global Times on Friday.

After the new legislation, those private and foreign firms will have legal protection, Lin added.

According to the new law, China will let the market play a decisive role in resource allocation, build a market with a competitive mechanism structure, and allow the market to decide energy prices.

"Marketization is an inevitable trend for the energy market, as many enterprises fear excessive governmental intervention on pricing, so in the long run, this term will be beneficial for the market to maintain a healthy growth," Lin said.

However, he warned that in the short run, general consumers could experience an electricity price increase.

In terms 19 and 20, the draft law stressed that China will strengthen its supervision of pollutants and greenhouse gas emissions and build a clean, low-carbon, safe and efficient energy system. China will also enhance international cooperation on energy by signing bilateral or multilateral deals.

"Including stricter supervision on pollution and gas emissions and strengthening international cooperation, the new law shows China's determination to participate in global climate governance and further open itself to the world," Lin said.

"That could help boost the new energy sector's development, but it could result in higher costs for traditional energy companies," Lin noted, adding that China has tackled many difficult tasks including balancing different parties' interests to release the new version of the energy law

Lin said that the new law has been in preparation for nearly three years, and that it is part of China's opening-up plan and will boost China's energy sector in the future.