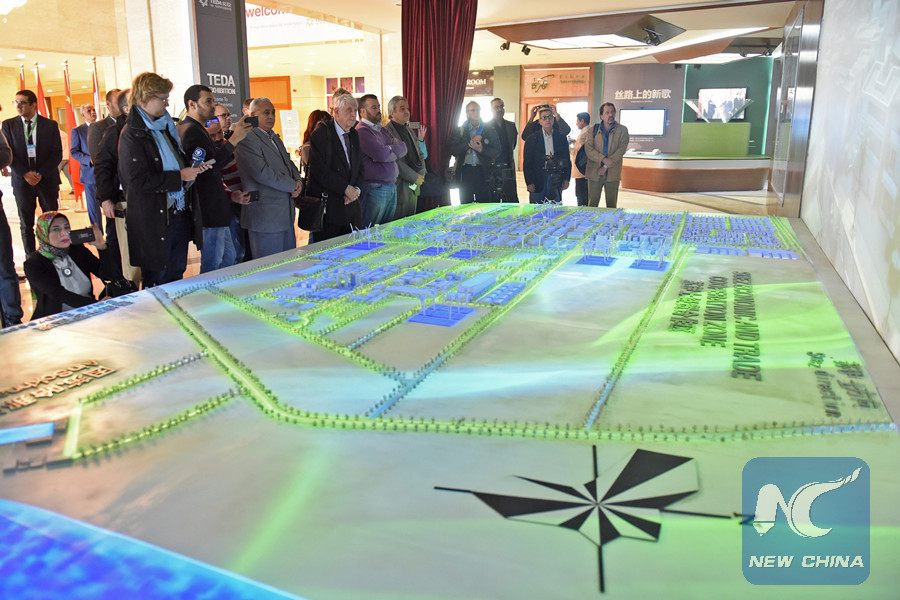 The China-Egypt cooperation, which is fruitful and beneficial to both peoples, has lifted the bilateral political and economic ties to a new height, Chinese and Egyptian officials have said.

At the opening ceremony of the two-day China-Africa Cooperation Zones Symposium in Cairo on Tuesday, Mohab Mamish, head of the Suez Canal Authority and the Suez Canal Economic Zone (SCZone), hailed the "remarkable" cooperation between the two countries.

"The Egyptian-Chinese cooperation is remarkable. It is in favor of the two peoples and we welcome it," Mamish told the symposium under the theme of "Results and Experiences."

China attaches great attention to enhancing cooperation with Africa in general, and Egypt in particular, he noted.

China's TEDA corporation, one of the oldest and largest developers of the SCZone, is currently working on the development project of an area of 7.23 square km in Ain Sokhna district in the northeastern province of Ismailia. The first phase of the project attracted some 68 enterprises after completion.

As one of Egypt's national mega projects, the development of the SCZone offers a promising investment opportunity for global companies.

This is illustrated by the success of China's fiberglass giant Jushi, a tenant company of TEDA industrial zone, which has recently helped Egypt become the world's third largest producer of fiberglass after the United States and China.

"The industrial area in Ain Sokhna is a model of cooperation between the two sides, where TEDA, which develops the area, honorably represents China and we do value its role in Egypt's development," Mamish noted.

China spares no effort to contribute to the development of African states through investment projects and construction of industrial areas, he said.

"China is the largest trade partner of Africa over the past consecutive nine years, as the volume of trade exchange between the two sides has reached 170 billion US dollars last year," Ji, also China's former Deputy Foreign Minister, said in a statement.

The Chinese diplomat pointed out that there are 3,100 Chinese companies investing in development projects in Africa, in addition to China's contribution to the UN peacekeeping forces and peacemaking missions in Africa.

"China is one of the largest developing countries and Africa has potentials. Cooperation between the two sides would bring the largest benefits for all," Ji noted.

China has the required technology, expertise and finance to help sustain the development of Africa, he explained.

"The Forum on China-Africa Cooperation (FOCAC) has become an important platform for cooperation between the two sides since the FOCAC summit was held in Johannesburg, South Africa, in 2015," Ji said.

Meanwhile, China's Ambassador to Egypt Song Aiguo said China will give the FOCAC summit due in September in China's capital Beijing "a new push for partnership with Africa to enhance cooperation in all fields."

"China has invested 4.5 billion US dollars in more than 20 economic zones in Africa, creating jobs for about 60,000 people," Song said.

"Egypt has a promising economic future and China will support Egypt to achieve development and deepen mutual cooperation," the Chinese ambassador added.