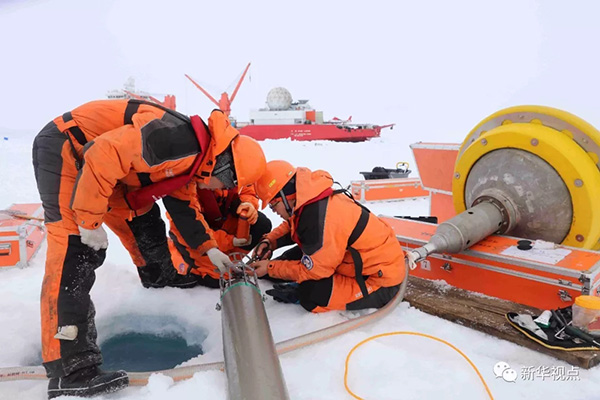 Chinese scientists work on the ice during the country's ninth Arctic expedition. [Photo/Xinhua]

Chinese scientists have installed an unmanned ice station system for the first time in the Arctic Ocean, ushering in an "unmanned era" for scientific observation of the North Pole.

The unmanned ice station was installed by scientists on the country's ninth Arctic expedition. Installment was completed on Wednesday and the observation data was successfully transmitted home .

The research stations can perform unattended observation of multiple fluxes in the ocean, the sea ice and the atmosphere, which is key to research on the changes in sea ice and air-sea-ice interactions in the Arctic, said Lei Ruibo, a scientist with the Arctic expedition team.

"The unnamed ice station is an effective supplement (to the research) in the absence of scientific expedition vessels," said Lei.

Currently, most countries use icebreakers to explore the Arctic — mainly in summer, resulting in a lack of understanding of key processes such as ice melting in spring and freezing in autumn, which are crucial to the understanding of changes in sea ice.

Working on ice is not an easy job. Scientists had to walk through snow, face piercing winds and be wary of potential ice cracks or even polar bears. In addition, changing weather in the region made it very difficult to arrange the operation.

"In addition, considering the harsh natural environment of the Arctic and the limited support for equipment installation, we have designed a package plan comprised of two prototypes and four subsystems, an unprecedented effort in the world," he said.

The unmanned ice station boasts a number of independently developed core technologies, such as long-term observation by light radiation inside sea ice.

In July, research icebreaker Xuelong, or Snow Dragon, set sail from Shanghai on the country's ninth Arctic research expedition which lasts for over two months.