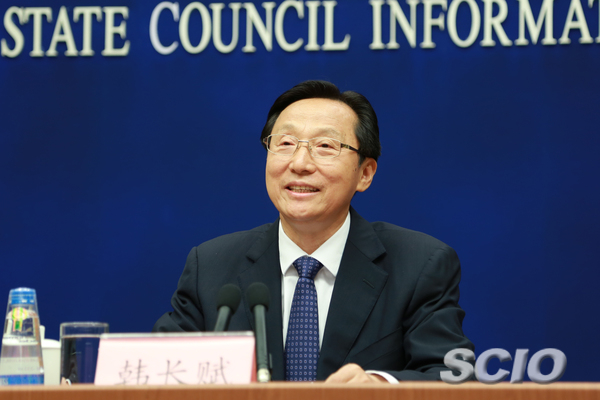 Food is one of life's basic necessities. What we put on our tables comes from those who toil away on farms, and in fields. Many countries hold agricultural festivals after harvesting products. And now, Chinese farmers will have a festival of their own since the CPC Central Committee and State Council declared on Thursday the annual lunar autumn harvest as "Chinese Farmers' Harvest Festival."

Han Changfu, minister of Agriculture and Rural Affairs, pointed out the importance of the festival at the State Council Information Office (SCIO)'s news briefing.

"Farmers represent the majority of the Chinese population. As a solid bedrock for the nation, they have made significant contributions during China's revolution, development and reform. As a way to boost farmers’ pride, happiness and fulfillment, the festival is supposed to effectively eliminate poverty and to build a moderately prosperous society in all respects," Han said.

China's rich agricultural history has helped lay a solid foundation for the festival. According to farming records for the past four decades, grain production has always been one of China's top performers. It has held steady at about 600 million tons for the last five years, according to Minister Han.

China has also helped modernize agricultural systems and boosted farmer incomes, while poverty rates have dropped. With the advent of the festival, more positive trends are expected.

The festival will reach beyond farms as well. Farmer cooperatives, new types of family farms, and some leading companies will get recognition thanks to their agricultural contributions. They're also encouraged to bring new information and management to rural areas, and meanwhile bringing more agricultural products and rural labor to cities.