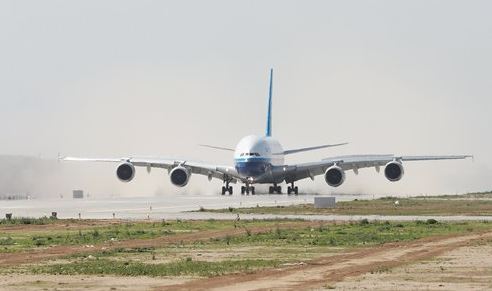 A passenger plane lands at the Beijing Daxing International Airport in a test flight on May 13, 2019. (Photo: IC)

China and the EU signed landmark agreements on civil aviation on Monday, a development that experts said could pave the way for Chinese aircraft to enter the European market.The agreement came against the backdrop of the escalating trade war between China and the US, as media reported that the ongoing trade war could deprive Boeing of billions of dollars of deals.The two agreements are the Agreement on Civil Aviation Safety between China and the European Union (EU) and the Agreement between China and the EU on Certain Aspects of Air Services.  "The signing of these agreements creates a relatively relaxed technical access environment for Chinese-made aircraft such as the C919, ARJ21 and MA700 to enter potential markets," Qi Qi, a Guangzhou-based industry market watcher, told the Global Times on Monday."The deal is related to the airworthiness certification of China's C919. At least it can pave the way for the C919 to enter the EU market," said Diao Weimin, an international aviation law expert and professor at the Civil Aviation Management Institute of China.Test flightsBoosted by demand, the C919 is still at the stage of test flights, but it has won 815 orders from 21 clients so far. To ensure the entry of the jet into foreign markets, China has held talks with the European Aviation Safety Agency (EASA) and the US Federal Aviation Administration (FAA) to obtain airworthiness certifications for the C919.In October 2017, the FAA and the Civil Aviation Administration of China (CAAC) signed an agreement on the implementation procedures of bilateral airworthiness certifications, making it possible for the C919 to enter US and EU markets.The long-awaited negotiations with the EU started years ago, and the two parties had a strong willingness to cooperate in the field of civil aviation security, as well as the hope of expanding pragmatic cooperation on the basis of consolidating existing cooperation results, according to the official website of CAAC on Monday night. "Of course, aircraft such as the ATR42-600 and A220 from the EU could also have a chance to enter the Chinese market, but the agreements will certainly promote the deep cooperation between China and Europe in the advanced equipment industry represented by aviation manufacturing," Qi said. Signing of the first agreement and its airworthiness certification annex is a response to the call for aviation industry development in China and Europe, and is conducive to bilateral exchanges of civil aviation products that have been developed and manufactured by both sides, Feng Zhenglin, head of the CAAC, said ahead of the signing ceremony, according to a report released by the Xinhua News Agency.China has been a big customer of France-based Airbus for years. Data from Airbus showed that Chinese carriers were operating more than 1,700 Airbus passenger aircraft by the end of January this year. China will need about 7,400 civil and cargo aircraft by 2037, accounting for 19 percent of the global new aircraft demand, Airbus said. Largest marketChina will displace the US as the world's largest aviation market in the mid-2020s, boosted by China's economic turn toward consumption, according to a report released by the International Air Transport Association in October 2018.The new agreements provide a sound environment for the C919 to get  airworthiness certifications, but this does not mean that the EASA will directly approve the CAAC's C919's airworthiness certificate. The actual flight safety of the C919 is still the premise for gaining the certificate, industry experts told the Global Times.