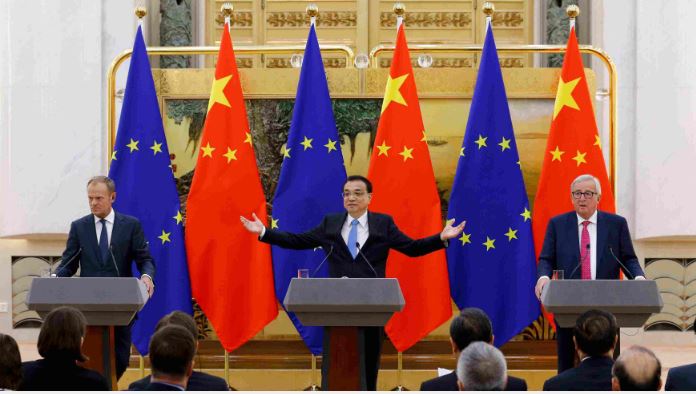 China and the European Union (EU) on Monday signed a joint statement between the two economic powers re-affirming their commitment to the Paris Climate Change Agreement and enhancing cooperation towards clean energy.

The EU and China will cooperate with other Parties to achieve, at COP 24 in Poland in 2018, a successful and meaningful outcome under the agreed work program to prepare for the implementation of the Paris Agreement, the statement maintained.

After President Donald Trump’s announcement last year, declaring to pull out of the Paris Agreement, developing nations are looking towards China to take a lead role in climate negotiations.

The member countries had agreed to keep the temperature rise below two degree Celsius as a part of the climate deal. The two-sides strongly supported the financial commitment of rich countries towards developing nations, to tackle the impact of climate change.

The financial commitment was one of the major points of contentions that led the US to pull out of the Paris agreement.

The joint statement released by the EU on Tuesday after the 20th China-EU Summit stressed that developed countries have a commitment on climate finance and assistance for adaptation and mitigation initiatives.

“The EU and China agree on the need for sustainable investment and green finance to drive the transition to a low greenhouse gas emission and climate resilient economy,” the statement maintained.

In another significant move, two sides also announced to work together with other countries to promote the universal ratification of the Kigali Amendment to the Montreal Protocol on the phasing down of Hydrofluorocarbons (HFCs) use.

The greenhouse gas, HFC, is known for damaging the environment and is used on a large scale in cooling and refrigeration systems.

"Through joint action, the EU and China will facilitate a smooth transition to environment-friendly alternatives used in heating, refrigeration and air conditioning systems,” they announced.

Both sides also agreed on setting up the EU-China Energy Cooperation Platform (ECECP) to promote and support their energy cooperation and clean energy transition. They also decided to work towards controlling emissions from the shipping and aviation industries.