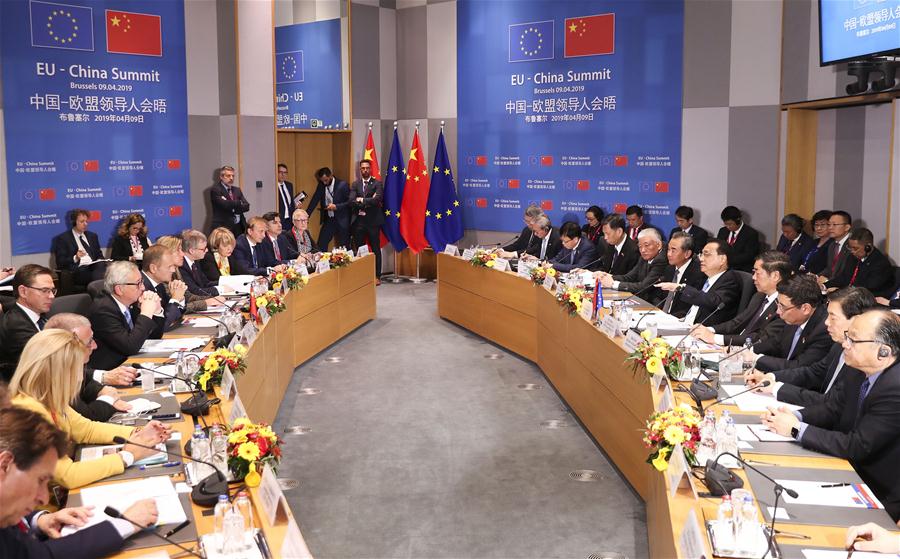 China and the European Union (EU) reached significant consensus on bilateral ties, charted out future cooperation and voiced support for multilateralism as leaders of the two sides held an annual gathering here on Tuesday.

Both sides agreed that they have broad common interests in deepening mutual beneficial and win-win practical cooperation, share common ground on upholding multilateralism and an open world economy as well as opposing protectionism and unilateralism, and have common goals in improving global governance and maintaining world peace and stability.

They also agreed on the great importance for China and the EU, two stabilizing forces and major economies of the world, to carry out strategic communication and cooperation.

The two sides said that they should firmly grasp the mainstream of cooperation and properly handle differences and frictions through dialogue and consultation to promote the long-term, stable and sound development of China-EU relations, which serves the fundamental and long-standing interests of both sides and will have a positive impact on the world.

The leaders of both sides reaffirmed their commitment to deepening their partnership for peace, growth, reform and civilisation, and to adopting a new agenda for cooperation beyond 2020.

They vowed to uphold multilateralism, respect international law and fundamental norms governing international relations with the United Nations at the core, firmly support the rules-based multilateral trading system with the World Trade Organization (WTO) at its core, and enhance dialogue and collaboration on WTO reform.

On trade and investment, they pledged to provide each other with broader and more facilitated, non-discriminatory market access, and to achieve in the course of 2019 the decisive progress required for the conclusion of an ambitious China-EU Comprehensive Investment Agreement in 2020.

As for enhancing cooperation in scientific research and innovation, China and the EU confirmed their intention to renew the China-EU Science and Technology Cooperation Agreement.

They welcomed the provisional agreement reached on the negotiations of the China-EU Agreement on the Cooperation on, and Protection of, Geographical Indications (GI), and committed to formally conclude the negotiations in 2019.

Both parties also agreed to forge synergies between the Belt and Road Initiative and the EU strategy on Connecting Europe and Asia, and enhance cooperation within the framework of the China-EU Connectivity Platform, so as to jointly make Europe-Asia connectivity more sustainable and interoperable.

They will support the peaceful settlement of regional disputes and conflicts through dialogue and consultation and will work together for world peace, prosperity and sustainable development, the two sides noted.

Important consensus has also been reached on government procurement, the zoning principle of bilateral trade in agri-food products, cooperation in climate change and clean energy, implementation of the Paris Agreement, among others.

China and the EU will create opportunities for each other while pursuing opening up, and will bring prosperity to the whole world while striving for cooperation, Li noted, adding that China is ready to work with the EU to elevate their relations to a higher level.

The Chinese premier also briefed Tusk and Juncker on the eighth leaders' meeting of China and Central and Eastern European Countries (CEECs).

China-CEEC cooperation is between China and a sub-region of Europe, Li said, adding that it is conducive to reducing the development gap among European countries and facilitating the European integration.

During the meeting, Tusk and Juncker said in the complicated and changing international situation, the EU is ready to enhance relations and cooperation with China.

The EU highly values the important consensus reached between the two sides during the meeting, they said, adding that the joint statement is an achievement of mutual benefits and win-win outcomes, demonstrating new positive development of China-EU relations.

The EU will implement the consensus along with China to push bilateral relations for more results, they added.

After the meeting, leaders of the two sides witnessed the signing of several cooperation documents in such areas as energy and competition.