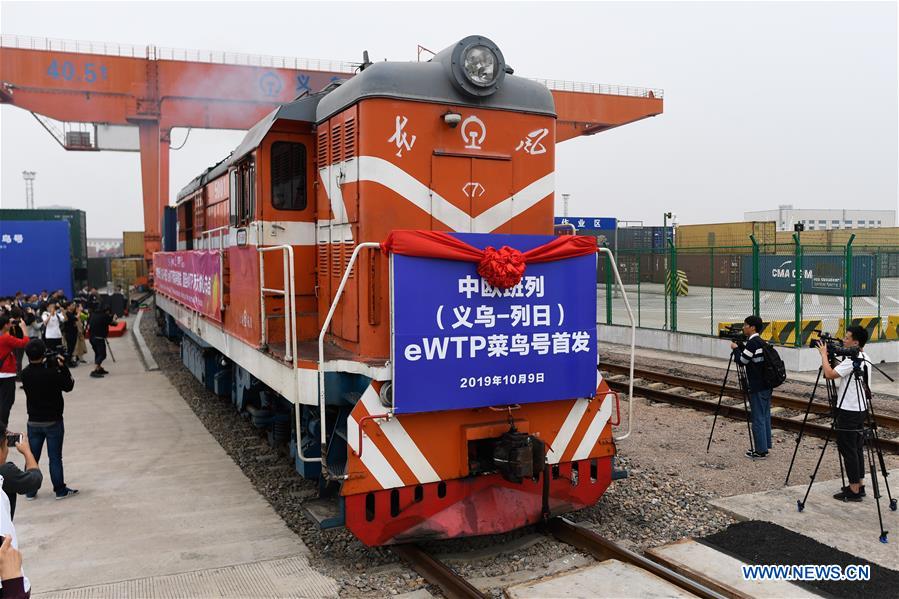 Loaded with 82 standard containers of commodities, the train is projected to arrive in Liege in about 20 days and runs twice a week.

After reaching Liege, the parcels can be dispatched to other European countries via eHub, owned by Alibaba's logistics arm Cainiao Network in Liege, and other regional distribution channels. The new route is expected to cut the delivery time from Yiwu to Europe by at least one to two days.

The new service is part of the cooperation between Yiwu City and Electronic World Trade Platform (eWTP) proposed by Jack Ma, founder of e-commerce behemoth Alibaba.

In June this year, Alibaba signed a cooperation agreement with the government of Yiwu to set up eWTP's global innovation center in the city.

According to the agreement, the two sides will innovate new trade modes in imports and exports, jointly build smart logistics hubs and develop new types of trade financing.

Dubbed as the "World's Supermarket," the city of Yiwu has a dense trading network. Around 15,000 foreign traders from more than 100 countries and regions are stationed in Yiwu, and more than 400,000 foreigners come to the city to do business every year.   The express delivery business volume in Yiwu accounts for about one-fifteenth of the nation's total, while about 40 percent of cross-border parcels transported by Cainiao Network from AliExpress, Alibaba's online global retail marketplace, come from Yiwu and its surrounding areas.

Since the first China-Europe train service launched in Yiwu in November 2014, cargo trains have made nearly 900 journeys and carried more than 70,000 standard containers of goods.

The new service has brought the total China-Europe train routes originating from Yiwu to 11, connecting the city with 37 countries and regions across Eurasia.