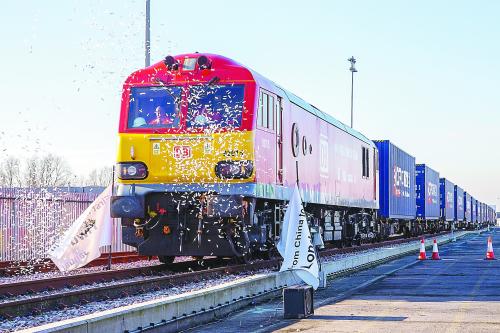 NANJING, April 2 (Xinhua) -- In the eastern Chinese city of Suzhou, China-Europe freight trains have fully resumed operation with over 50 percent increase in the number of trips in March year-on-year, local authorities said Thursday.

In March, Suzhou has seen 35 trips made by China-Europe freight trains, up 52.2 percent year-on-year. The total value of the goods reached 134 million U.S. dollars, up 13.6 percent.

Nearly 400 manufacturing enterprises export commodities via the China-Europe freight trains in Suzhou, according to Chen Jianbin, chairman of Suzhou Newcity Investment and Development Co., Ltd, operator of the trains in the city.

The China-Europe freight train in Suzhou was launched in November 2012. In 2019, the city saw 269 trips made through the route with the total volume of goods reaching 1.25 billion U.S. dollars.