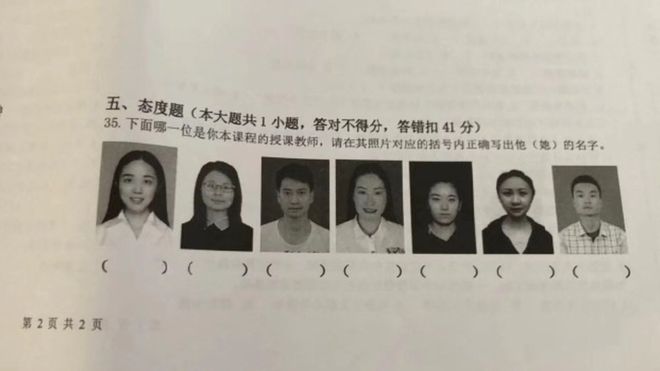 Students were told they would lose 41 points if they could not correctly identify their teacher. (Photo: China Youth Daily)

A Chinese college has reportedly raised eyebrows after it including an unusual question on its final exams - asking students whether they could identify their teacher.

According to China Youth Daily, students at the Sichuan Vocational College of Culture and Communication were handed papers with photos of seven people during their exams, and asked to select their teacher and write their name underneath.

Those who were able to identify their teacher did not get any extra marks, but students were severely penalised if they answered incorrectly, having 41 points deducted from their final score. China Daily says that the identity test accounted for 30% of their overall grade.

Hu Teng, a teacher at the institute, told Beijing broadcaster BTime that it was the first time such a question had been introduced in a class. "The original intention of this was to assess students' general attitude towards study," he said.

"We wanted to see whether students have worked hard in class… and whether they have been paying attention to details.

"If they can't even remember their teacher's name, then they clearly have no interest in the curriculum."

The test has attracted considerable attention on Chinese social media.

Some on the Sina Weibo microblog said that they thought the test was "tasteless" and admitted that they did not know or were unable to write the characters that made up their teacher's name.

However, others applauded the college's decision. One said: "Remembering a person's name is basic respect!"

Another added: "If students are not in class, of course they will not know their teachers' names, so it's a good question to ask!"

Other higher education institutes have tried to find ways to combat the problem of students skipping class in recent months. In October, a Chinese university introduced a facial recognition system in its classroom, in order to deter students from cutting classes.