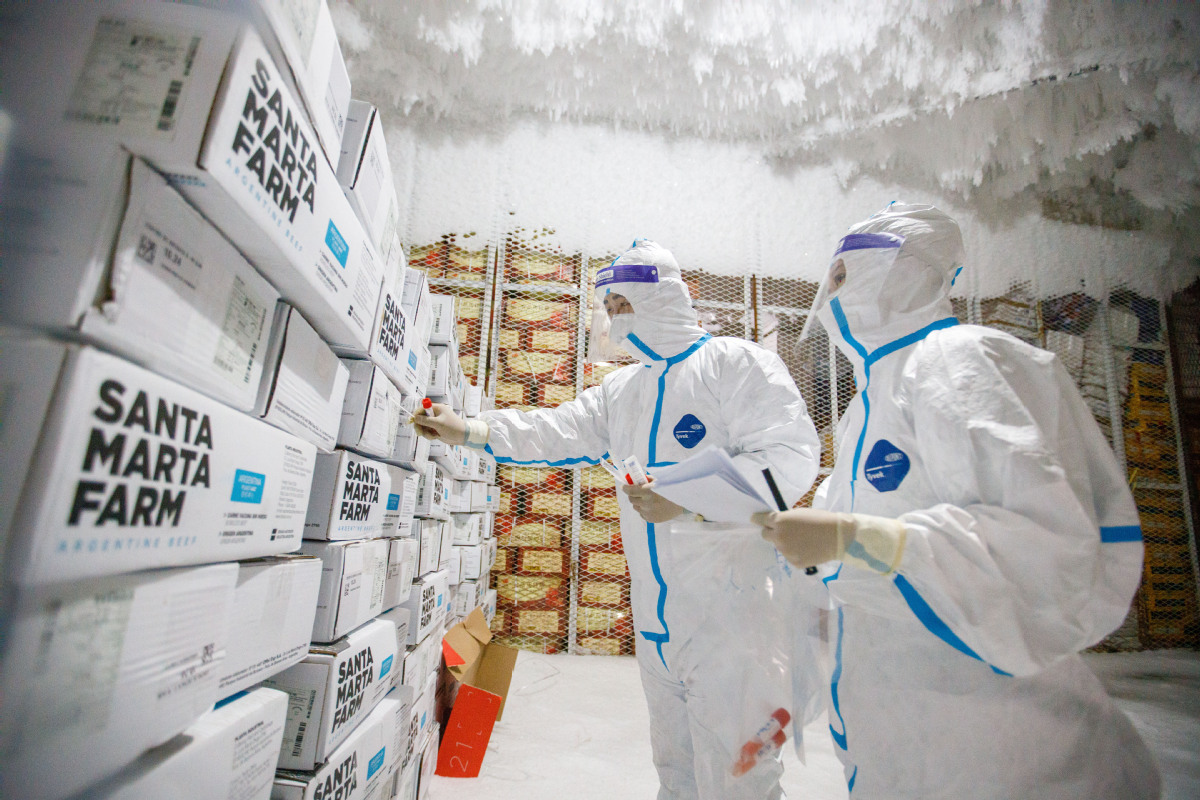 Stringent monitoring of cold-chain food imports and the fine-tuning of lockdown and testing strategies are China's latest weapons in the battle against COVID-19 as the country braces for possible outbreaks this winter.

While local transmission of the novel coronavirus has been under control for months, public health experts in China have highlighted the risk of new outbreaks linked to the virus hitching a ride on imports of frozen foods.

As domestic life and production return to normal, experts have hailed local governments' efforts to replace blanket lockdowns and citywide tests with more targeted and economical measures to reduce disruption to socioeconomic development.

"A growing body of evidence shows that frozen seafood or meat products are likely to bring the virus from severely affected countries into China," said Wu Zunyou, chief epidemiologist at the Chinese Center for Disease Control and Prevention. Wu made the comment last week in an article posted on the website of the Communist Party of China Central Commission for Discipline Inspection.

"The discovery has prompted customs officials to step up testing on imports, and prompted local market regulators and health authorities to tighten supervision over the cold-chain sector."

In an interview with China Newsweek last month, Wu said virus transmission risks from contaminated seafood imports are likely to be greater than those from incoming passengers.

Since June, at least three major outbreaks have been linked to frozen imports, said Feng Zijian, deputy director of the China CDC, during a recent interview.

Excluding a major outbreak in Urumqi, Xinjiang Uygur autonomous region, that saw over 800 confirmed cases, the three outbreaks account for nearly 85 percent of domestic cases since June, according to the National Health Commission. The source of infections in Urumqi is still under investigation.

Concerns linked to cold-chain food imports are bound to rise as cargo shipments into China increase, according to Zhang Wenhong, head of the infectious disease department at Fudan University's Huashan Hospital in Shanghai.

"Land ports and international airports in China will need to cope with the risk," he said.

Wu said virus control in the cold-chain sector entails three layers of testing－samples of imported goods and their outer packaging, samples taken from vehicles and cold-storage facilities and testing of workers involved in handling such products.

The tests are being implemented regularly nationwide and have begun to pay off through timely alerts.

CDC officials in Nanjing, Jiangsu province, said on Nov 10 that they managed to block and seal some cold-chain imports from entering the market after shipments from Argentina tested positive for the virus during a routine test.

Then, from Friday to Monday, local governments in nine regions said they had detected the virus on cold-chain food imports or their packaging, resulting in the immediate shutdown of affected facilities and the sealing of contaminated products.

He Peng, a spokesman for the Tianjin Health Commission, said at a recent news conference that a local dockworker was confirmed to have contracted the virus after a routine test of frozen pork from Germany tested positive.

"We must adhere to the principle of fending off risks carried by both products and people, especially workers coming into contact with cold-chain food," he said. "Their health is the basis for blocking contaminated food products."

On Nov 9, the State Council released a guideline requiring thorough disinfection of cold-chain imports after collecting samples for testing and urging the establishment of tracking systems.

On Monday, the Ministry of Transport published another guideline urging all companies, docks and freight terminals involved in cold-chain logistics to protect their front-line employees by enforcing safety protocols, monitoring their temperatures and conducting nucleic acid testing. It also stressed the importance of the strict and regular disinfection of transportation equipment and vehicles.

Wu, from the CDC, said, "Instead of imposing a reckless and simple ban on all imported food, China has decided to integrate management of cold-chain products into regular disease control work and mitigate risks to the lowest possible level."

He said the State Council guideline is aimed at ensuring the safety of cold-chain food and safeguarding people's health while increasing the efficiency of customs clearance and securing the stability of the industry chain.

Similar efforts aimed at striking a balance between curbing the virus and continuing the pace of economic recovery are part of adjustments to the scope and duration of long-standing epidemic control measures. 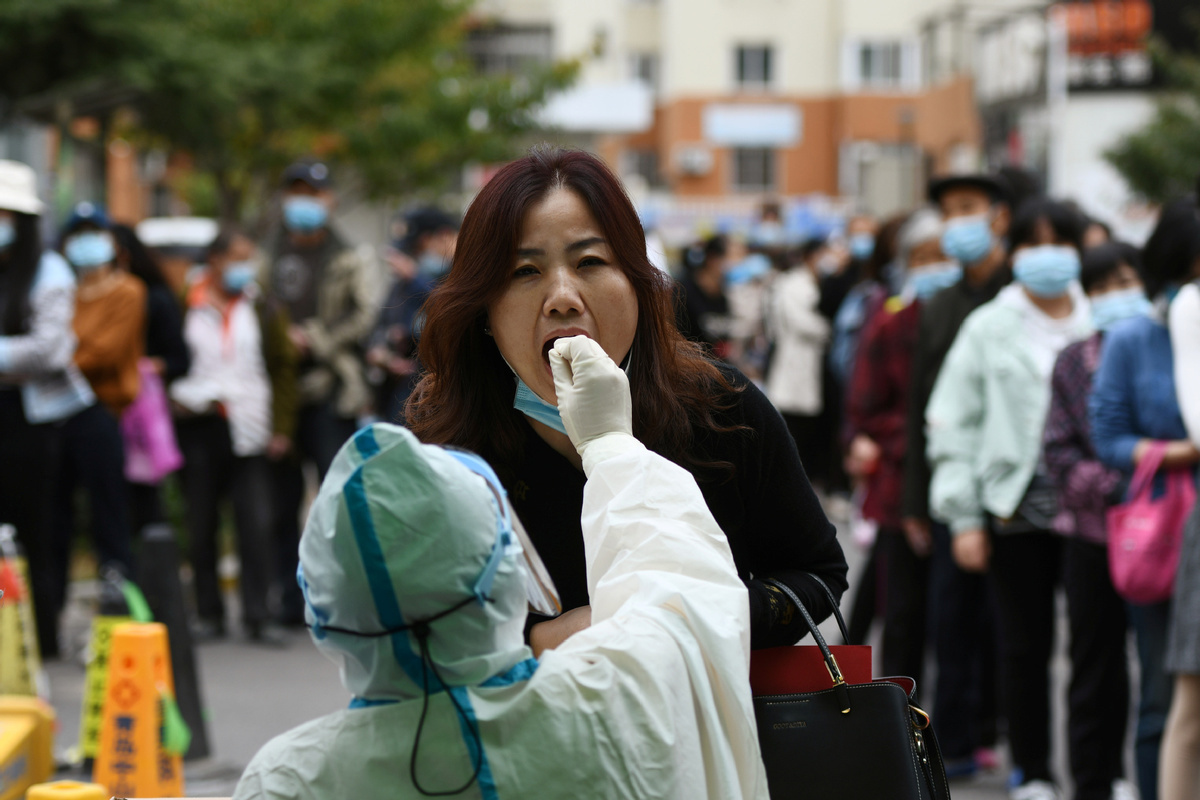 A medical worker in protective suit collects a throat swab from a woman at a nucleic acid testing site in Qingdao, Shandong province, on Oct 13, 2020. (Photo: China Daily)

Feng, the CDC deputy director, said community lockdowns imposed nowadays are "distinctly different "from those in Wuhan early this year.

"Lockdowns are more precise now, affecting smaller areas and having less impact on society, though the goal remains the same: to reduce population-mixing," he said.

When Tianjin detected three local infections among cold-chain workers this month, the city upgraded virus risk levels from low only to medium in three areas where the confirmed patients and several asymptomatic individuals worked and lived. Mass testing covered only residents in medium-risk areas and all cold-chain workers in the city.

Zhang Diyuan, a program developer in Tianjin's Xiqing district, about 100 kilometers from the affected cold-chain facilities, said the new cases did not affect his life at all.

"I'm in favor of such an accurate designation of risks," he said. "As a Tianjin resident, I see no need to expand lockdown areas."

When the Beijing government was dealing with the outbreak in June, the launch of a citywide testing campaign covering all 20 million residents of the capital was initially proposed, Wu said.

"The campaign was called off after screening 10 million because an additional 10 million tests would not detect any more cases and would pile on unnecessary costs," Wu told China Newsweek.

"Other cities should use the science-based and refined method. Large-scale tests should revolve around the origin of confirmed infections and be called off when no new cases can be found."

Zhang, from Shanghai, said during a forum last week that even though the virus continues its rampage worldwide and China has largely stamped out local transmission, there is no need to sever communication with the outside world.

"We should maintain a certain degree of international cargo and personnel exchange while properly managing risks stemming from imported cases," he said.

To reach the goal, Zhang underscored the importance of fever clinics being able to detect suspected cases and send alerts swiftly, as well as the ability of public health workers to track down close contacts.